The Race for the Sawamura Award: Yudai Ono well in the hunt 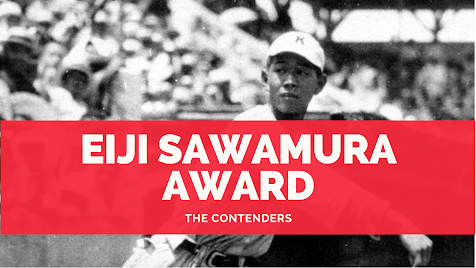 With about 20+ games left in the season, the post-season awards are starting to come into focus. The Eiji Sawamura Award in particular looks to be an interesting case for a battle between 3 Central League starters; Tomoyuki Sugano of the Giants, Yudai Ono of the Dragons and Yuki Nishi of the Tigers. Mention could also be made for Yoshinobu Yamamoto of the Buffaloes and Hideaki Wakui of the Eagles in the Pacific League who too is having an excellent season.

First of all, we should run through what it is the selection committee looks for. It is always important to understand that the Eiji Sawamura Award differs from the MLB's Cy Young in a number of ways. Firstly, the Sawamura award is only given to one pitcher in the entirety of NPB. The MLB awards a Cy Young for the American League and the National League. Also, the Sawamura is judged against a very specific criteria that is said to embody the spirit of Eiji Sawamura. The Cy Young is generally just awarded to the statistically "best" pitcher. Finally, a Sawamura Award committee comprised of former winners of the award decide who receives it; not the media and not the players' peers.

So, what are the categories that the committee scrutinize the most?

* As of 2018 players are also judged on QS%
Generally, a player must fulfill 4 of these categories in order to be considered for the award. In recent years, complete games have been the most difficult thing to assess with only 2 players in the last 10 years reaching 10 CG (Masahiro Tanaka 2011, Tomoyuki Sugano 2018). I haven't seen a number for QS%, but I'm going to assume it's about 75%.
The other thing we must consider in 2020 is that the season has been shortened by 23 games. The Award committee may well need to be a little more flexible in their assessment of appearances, wins and innings pitched in particular as most starters will likely pitch in 4-5 fewer games than they have in the past.
Rather than dally too much on those facts, I want to have a look at how each starter currently looks and make some broad assumptions about where they might end up at the season's end. I don't have much in the way of projection equations, so we'll just be taking educated guesses.
Let's line up the players stat lines and see where each player is at currently:

All but Hideaki Wakui have already passed 3 of the categories; W%, ERA and QS%. Whether or not QS% counts as one of the 4 categories, I'm not sure. Otherwise everyone is travelling well. However, what would these stat lines look like if we extrapolated for a 25 appearance season where most Sawamura award contenders in the past have been judged? I'm keeping ERA, QS% and W% as constants to ease of averaging everything out:

This makes things really interesting. Yudai Ono and Tomoyuki Sugano now fulfill 6 of the 8 categories. In this case it's a battle between Ono, who pitched more innings, strikeouts and complete games vs Sugano who has 19 wins and otherwise relatively comparable numbers. This then comes down to how you value wins vs complete games. In Ono's case, he's really carried his team to what could be their first A-Class finish in 8 years. Sugano on the other hand has just about been the best player in the Central League this year and is a good candidate for MVP as well as the Sawamura the only thing there is that the Giants are a much better team overall. It is however worth saying that wins mean something to the committee. Only one pitcher has taken the award without 15 or more wins and that was Yutaka Ono of the Hiroshima Carp in 1988 where he had 13 wins over 33 games.
The other thing we must take into account, is that if Sugano wins the Sawamura, it will be his third. That will put him in a very elite club with 4 other pitchers that have won the award three times. The the committee may well not consider him worthy of the company.
Finally, if Sugano were to win the MVP, then perhaps the committee might be more willing to give the award to Yudai Ono so that the awards are shared around a bit more. In NPB history, there have been 14 MVP-Sawamura dual award winners. The Central League haven't been fond of doing this as much as the Pacific League in recent years with Kenshin Kawakami in 2004 being the last such pitcher awarded both prestigious titles. Since Kawakami, 5 Pacific League pitchers have been dual holders of the awards.
I think it will really come down to the intangible factors, the things that pitchers by themselves really can't control. Sugano has had a monstrous 2020, but Ono has been similarly excellent on a much poorer team. It may come down to a very subjective decision but if the Dragons finish second in the league, Ono might just sway the decision his way.
Posted by Scott M at Thursday, October 15, 2020