Special Feature: Getting to know your Dragons - A chat with Yota Kyoda & Shigekazu Mori

Thanks to the very helpful folks at Japan Baseball Weekly podcast, I am privy to bring you, without overselling it, an exclusive interview with 2017 Central League rookie of the year, Yota Kyoda and Chunichi's third-year manager, Shigekazu Mori.

There are some interesting insights here particularly about how Kyoda views his second year in pro ball and perhaps especially about Mori's faith in his bullpen. I am really excited to be able to present an otherwise inaccessible area for this blog. These interviews took place before the 7-2 defeat to the Swallows on the 27th of June. 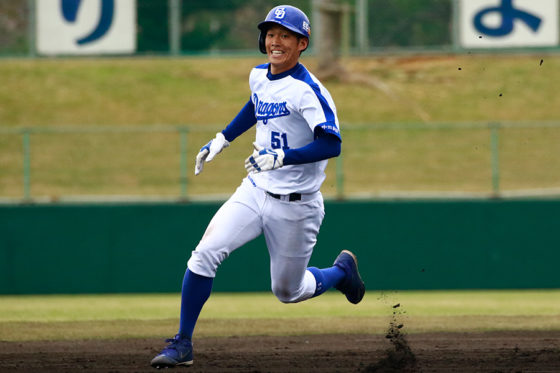 (Noise of bat on ball present throughout entire interview)

JBW: Last year was your rookie year. After playing so much baseball did you start to feel fatigued?

YK: Yeah, there was a bit of fatigue. During the summer as it gets hot your body gets heavier and I wasn't able to play the way I wanted to. I'm starting now to get amply prepared for the summer.

JBW: You're going to experience that same wall (with the fatigue), how are you dealing with it?

YK: Yeah, opponents have done their research on me;I hit leadoff last year, but hitting second this year, I've had a lot more things to worry about, and that has been a challenge. But hitting leadoff, I can just go out and swing freely. I think it's the easier spot to hit in. But I'll probably hit in the two hole in future, so it's valuable experience for me.

JBW: For example, batting at second you have Almonte behind you, is there really that much more to think about?

YK: Well....(Almonte's) in good form and with runners on...and while I am thinking about his ability with runners in scoring position the opposing pitchers come at me in tight areas and it's not quite going as I'd like. (I'm) working on a strategy

JBW: In regards to the team's form, I don' think it's wrong to say you're conceding runs, runs scored 4th in the league; so how do you think the team can go about addressing this?

YK: Yeah. The pitching and hitting don't often work out on the same night. When the pitcher is having a bad day the bats have to rise and when the pitcher is doing well the order has to do well to cover for him.

JBW: How would you rate your defense? You seem to have gotten better since last year. What do you think has changed?

YK: The first thing for me is positioning. Last year there were a lot of batters that I hadn't seen and I went in not really knowing what to expect, but through the year I got a good feeling for the batter's habits and characteristics.

JBW: But, but, but there's data for that isn't there?

YK: Of course there's the data, but there's nothing like experiencing it for yourself.

Dragon Soul's Analysis:
Kyoda seems understandably frustrated with his current struggles. One revealing part of course is he feels he need to think a lot more batting behind Oshima at the top of the order. Perhaps it that overthinking that has caused him to lose a bit of form on last year. It is also good to see that he's moving forward with preparation for summer but that's going to be the least of his worries with his current woes.

Interesting the claims regarding Kyoda's improving defense. While I'd say his blunders haven't been as pronounced, he still ranks 8th in the NPB in UZR for qualified short-stops at -1.4. He was at the top of the list with Seibu Lions' Sosuke Genda in the first half last year. Whilst UZR isn't the best way to analyse fielders at points during the season, it is a slightly worrying indication that he is performing below the NPB average for a short-stop at this stage of the year.

This interview however didn't age too well as Kyoda was demoted to 7th in the order on the 28th. It isn't looking good for him at the moment but there aren't too many other options available and you kind have to keep the faith. Let's take some solace though in the fact that Mr Dragons the third, Kazuyoshi Tatsunami, hit .235 the year after his rookie season and look what happened to him. 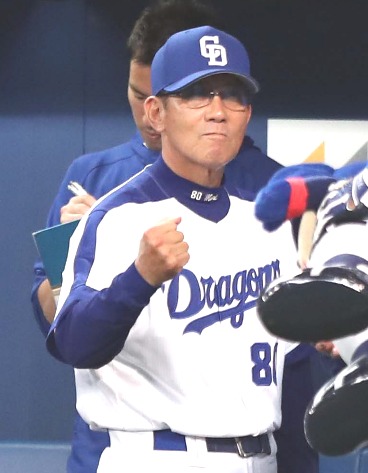 (Crack of ball on bat still present. Atmosphere is very jovial and friendly)

JBW: You've used a lot of starting pitchers this season, haven't you?

SM: Yeah, the starters and all the relievers, our team balance is off at the moment. If we give up three runs, we can win by scoring four. When it's a one- or two-run game, we can't score a run. Conversely, when the pitchers give up a lot of runs, if we could score a bunch we'd be okay. Any team could put a winning streak together right now if there's that kind of balance.

JBW: So what about Chunichi? How do you guys do it?

SM: When we try to score a run, we can't do it. And that's the problem. When we pitch well, we don't get any runs. And when one pitcher gets hit hard, all the pitchers get knocked around, and even if we hit, we come up a run short. We need to turn that around. What can you do to help me out?

JBW: I can only watch on TV and cheer.

SM: When the starters do their best to get through 6 or 7 innings keeping things to 1 or two runs....

JBW: Wait a sec, you say 6th and 7th inning, but you have pitchers out there in the 8th and 9th who are getting hit and losing games.

SM: Well, the relievers are mucking it up. We put together some good games, but the set-up guys or closers blow it. The starters work hard to keep us in the game, but we have a lot of older pitchers. If they could just hold them to one run in their one inning of work, it'd be OK. But it ends up being three, four runs or more, and that means there's nothing the batters can do. We have to put a stop to that kind of thing. If they only allow one run in an inning, we can put up with that. We blow way too many chances to come back in games, and, you know, that's what a bad team does. So go out and try to find me some pitchers who can do that!

Dragon Soul's Analysis:
Apart from the general jovialness of Mori in this interview, it is interesting at least to hear his opinion regarding the bullpen. He doesn't seem to have much confidence in his late inning guys and with good cause. The Dragons have one of the worst bullpen ERAs in the Central League. Hiroshi Suzuki, who started off so well now has an ERA closer to a back of the rotations starter than a set-upper. Shinji Tajima, our premier closer sits at 6.12 and the god of death himself, Hitoki Iwase has ballooned to a massive 5.71. The relievers just can't keep the runs down. Daisuke Sobue is the only reliever with a sub 3.00 ERA. It's actually 1.21 after 29.2 innings.
While Sobue is off having a career year, the rest of the bullpen is in pieces as Mori laments the lack of a good bullpen to call on and a reliable starting rotation.

The balance of bats not putting in runs when they're needed to is not exactly a new phenomena. Part of it is the rotation not being settled and the match-ups for starters not being well thought out while the line-up is for some reason unbalanced. Individually the Dragons line-up doesn't look that bad (if you ignore Kyoda) so it's a bit of a bad luck in some ways that the team haven't piled on more runs.

Mori's interview in particular paints a pretty sad picture but also gives us a bit of insight in to how powerless he's feeling at the moment to improve this team. It seems to be that there just aren't enough decent pieces out there to put together a half decent team.

Hopefully as the season progresses a few farm hands will find their feet in the first team and take some of the heat off the bullpen. There are certainly some boys doing well so I do hope to see some fresh faces eventually. Seeing Tatsuya Shimizu come up on the 28th was a wonderful surprise and a good move forward while the continued use of Kento Fujishima in long-relief and also recently in a starters role means that the management are very willing to give the youngsters a shot if they're good enough. Needless to say, it looks like it's going to be another long year.

A big thank you to the Japan Baseball Weekly podcast for putting this opportunity together. Please ensure you give a listen to the podcast next week as Steven Moya will be present for the weekly interview. The JBW podcasts are a great way to keep up with the NPB action and the banter and interplay between the hosts is always makes it a good listen. Their podcasts are listed here.