The NPB draft is just around the corner, Monday the 26th to be exact. We've only a little while to wait to see who the latest players into the fold will be. It will however be a different kind of draft this year thanks to the COVID-19 pandemic still raging on in Japan. The grandiose draft meeting will be a little more subdued with each team having a private room to minimize contact, while perhaps the biggest story is that, without the Koshien and other amateur tournaments going ahead this year, there's a lot larger element of luck with picking your guys.

There isn't a Takaya Ishikawa or Akira Neo that dazzled for their high school teams on the biggest amateur stage in Japan. There isn't a Kyota Fujiwara, Shinnosuke Ogasawara or Taiga Hirasawa that lead their team deep into these tournaments which makes the pickings at the top all the harder to plan for and also provides fewer bolters for the first round of picks.

Whatever the case may be, this may be a bit of a crapshoot of a draft beyond the first couple of rounds. I think we'll see even more high school amateurs take the college route as well to avoid being missed entirely by pro teams. That in itself will make the 2024 Draft quite intriguing for the COVID-19 generation of high school kids.

So, with all this going on in the background, who are the top talents available? I'm going to give you a taster of who is being talked about for the top few rounds and with a basic idea of who wants them and what kind of player they are. I will just run through 6 highly talented players (in no particular order) just to give an idea of who’s out there.

Hiroto Takahashi (高橋宏斗)will be one of the top targets at the draft. The right-handed pitcher has a fireball 153km/h velocity at 18 years old. Born in Owariasahi to Nagoya's northeast, Takahashi has been turning heads. Up to 7 clubs have expressed interest in the Chukyo hurler, and it has been murmured that his backyard club, the Chunichi Dragons are the most interested of the lot. This would be another "backyard" pick for the Dragons, whose last 3 top picks have been local or at least within team catchment talent. According to SportsNavi!, Takahashi is the highest rated talent at the draft this year. Nikkan Sports, seems to think the Dragons may even have a clear run at him. 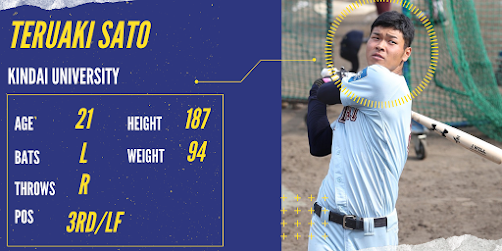 Teruaki Sato (佐藤輝明), who I will now deem "Teriyaki" Sato for posterity, is the biggest bat on the draft card in 2020. A left handed third baseman who is a big boy, bring power to the plate. Sato won the MVP in the Kansai University fall league in 2018 where he hit with a .354 average and a .998 OPS. He was listed in the Best 9 at third base in spring of 2019 where he hit .333 with an even more impressive 1.107 OPS. Initially struggling to get on base, Sato showed steady progression with his plate discipline to turn into a very dangerous hitter. The jump from the Kansai University league to the NPB is a bit harder than a jump from the Big6 League in Tokyo, but Sato is not without his fair share of suitors. The Tigers, Giants, Hawks, Lions and Buffaloes are all reportedly set to select the slugger in the first round. I'd like to see him land at the Lions, Buffaloes or even Hawks. At the Lions and Hawks there are veteran sluggers at third that need replacing eventually and Sato would be well placed to make the step up gradually. At the Buffaloes however, he'd probably start from the outset with the team struggling to find a consistent successor to Eiichi Koyano who retired two years ago.

The top lefty pitcher on the card this year, Takahisa Hayakawa (早川隆久) already has a number of suitors with hometown team, the Chiba Lotte Marines, already declaring their interest in signing the man who went to high school in Kisarazu. The top velocity of 155km paired with his left-handedness alone make him a tasty looking prospect. With a 10.49 K/9 for his university career, Hayakawa stands out as one of the best prospects available. At present, the Carp, Baystars, Swallows, Marines, Eagles and Fighters look to be in the hunt for his signature in the first round. Possibly the most well polished of the prospects, it's no surprise that Hayakawa is a headliner for this year's draft. 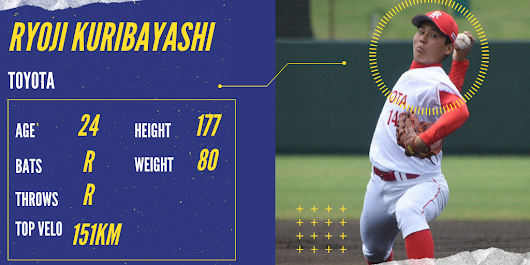 A couple of years ago when Ryoji Kuribayashi (栗林良使) was at Meijo University, I highlighted him as a possible first or second round pick for the Dragons in 2018. The right hander however took a blow to his stocks and skipped the draft to pitch at Toyota which appears to have worked for him. Murmurs are that he'll almost certainly go in the first round this year particularly with the lack of barnstorming high schoolers rocketing to recognition in 2020. Traditionally reliant on the fastball, Kuribayashi could be another that better projects as a reliever rather than as a durable starter. Control was an issue that dogged him in college and it appears that this may still be a concern. Depending on where you look, he either tops out at 151 or 153km/h and has international experience with the Japanese collegiate team and the shakaijin amateur international squad that won the Asian Winter League in Taiwan last year. The Dragons, Carp and Baystars are said to be the most serious suitors for him at this stage but most likely as a fall back first pick.

The next most impressive talent off at the draft this year is college righty, Hiromi Ito (伊藤大海). A member of the collegiate Samurai Japan team, serving as the team's closer, Ito already has been tipped for big things. A strong fastball with a solid arrangement of breaking balls, Ito is perhaps the best "ready to go" pitcher available. A solid choice for any role, but one might think he projects for a bullpen role. Another likely "local" choice, the Hokkaido Nippon Ham Fighters have already declared their intention to select Ito in the first round. 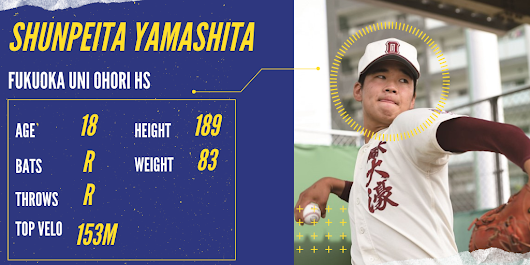 Possibly the talent with the most potential upside, Shunpeita Yamashita (山下舜平大） has been making waves this year. For any team, Yamashita would be a project to work on with. This year in what games have been held, he threw with a BB/9 of 4 and a SO/9 of 8.39. He did however have an extremely impressive outing against Higashi Fukuoka High School where he fanned 13 batters in 7 innings. An ace for his team since his second year of school, Yamashita may well have been one of those Koshien stories if not for COVID-19 ravaging the world this year.  Among his best breaking balls is a sharply dipping curve which is probably his best delivery, but has also a decent slider and change-up in his armory. Probably another back-up pick or at worst a second-round pick. He could be one for the future however.
As you can probably tell, the majority of the "top" talents this year come out of college which isn't surprising given the lack of high school baseball this year.
Only a couple more sleeps to go. Watch this space for me annual Dragons draftee report.
Posted by Scott M at Saturday, October 24, 2020