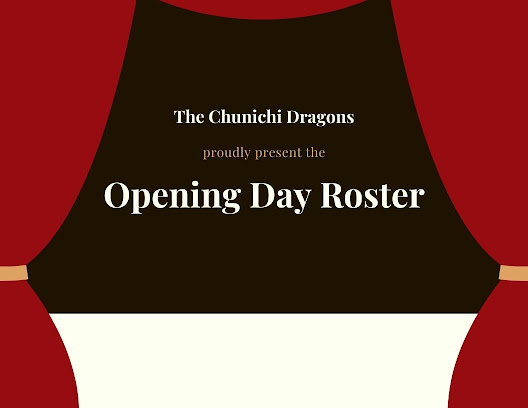 With opening day almost upon us, the Dragons and all other NPB teams have announced their opening day rosters. For the Dragons there's not a whole lot of surprises if you've been keeping an eye on the pre-season. The key players one draws their eyes to however is the bevy of young talent being given the experience to take the field during one of the most exciting weeks of a baseball season.

Takuma Kato didn't do enough to show that he could be a bench catcher in the team this year despite being first choice in 2019 and starting 2020 as the teams' #1 behind the dish. Takuya Kinoshita showed immense quality last year and it's safe to say that he will be the everyday catcher for the Dragons in 2021 as long as injury or massive form dip does dog him. Alongside him as the likely back-up is Iori Katsura. He hit relatively well in pre-season and has otherwise not put much of a foot wrong. In the third spot, is one of the Dragons hottest prospects, Kota Ishibashi. The Chiba-born Ishibashi was on fire in the development league; he hit homers and lead pitchers like Shinnosuke Ogasawara with aplomb. It's a fantastic reward for all his hard work to witness the opening week.

Wataru Takamatsu and Akira Neo are the younglings of this group with both coming to prominence this spring. Keep in mind that Neo will likely play outfield, but is registered as an infielder. Takamatsu arguably has the fastest legs in the team and could see plenty of time as a pinch-runner or even as a possible challenge for Toshiki Abe's spot as he had an underwhelming pre-season with the bat. Taiki Mitsumata is another that shot to prominence this year with superb plate discipline. He and Neo are the closest that team has to utility infielders on the starting day roster. Mitsumata will likely help out at third, second and maybe short.

Otherwise, the infielders are what we saw last year with Shuhei Takahashi in the hot corner, Dayan Viciedo starting at first base, Abe at second and Kyoda at short.

The old and the young battle for places in outfield with 19-y/o Yuki Okabayashi and 41-y/o Kosuke Fukudome in the team for opening day. The only real locks here are Oshima and Hirata as per the last 5 or so years, but who will take left-field is still a bit up in the air. Fukudome and Neo seem the most likely while Takino could also see some time after showing up with the bat in the Spring. I would argue that Fukudome is a much more imposing figure in the lineup and if the team value winning the series over development opportunities, the former Chicago major leaguer should get the nod.

As I predicted, these are the 3 starters the Dragons will roll with for the first series in Hiroshima. I have bad memories of Ogasawara getting beat in Hiroshima when he was the opening day starter in 2018, but I have a strange confidence in this top of the rotation getting something done against the flailing (Magi)Carp.

I’ve added a punt on how the relievers will be used in what leverage situations. Raidel Martinez is still undercooked having arrived late and through quarantine. Daisuke Sobue looks likely to be the closer for now. Hiroto Fuku had a big year as well in 2020 and he’s locked in for the 7/8 inning. Hiroshi Suzuki is starting to look like the prospect we’d hoped and will likely be trusted in the latter innings with Keisuke Tanimoto playing a role as well.

Overall the bullpen is a strength again this year and is actually a bit deeper than 2020’s edition. Once Randy Rosario arrives, the team will probably have close to the best bullpen in the league if they don’t already.

My last post I think covered my thoughts pretty well about the team and my idea over the line-up haven't really changed. The only main difference is that Tatsuya Shimizu blew his chance to be part of the starting day rotation and Akiyoshi Katsuno, surprisingly perhaps, has been given the job of game 2 in Nagoya against the Giants.