Manager, you? The quest for the next Dragons manager. 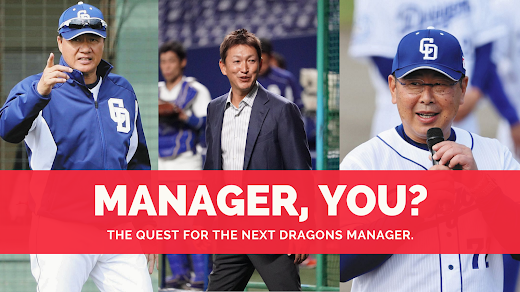 Tsuyoshi Yoda is in the last year of his 3-year contract. Much speculation now has arisen as to who will become the next manager as the assumption is only one good season in the last three is a poor enough result for Yoda to be moved on. In normal circumstances this is probably true, however with parent company Chunichi Shimbun losing money during the pandemic through limited gate receipts and the general downturn in the newspaper business, it is very possible a cheaper option for next season will need to be considered.

Yoda and his backroom team have a lot to answer for after a poor third season in charge. Despite a relatively positive 2nd season in which the team finished 3rd, their highest finishing position in almost a decade, 2021 has been a disaster hallmarked by the team's poor production with the bat. One would think that Yoda is halfway out the door but there have been many positives to his reign. Yoda came onboard with the mission to improve the pitching staff. Under Shigekazu Mori, the pitching was erratic. There was a time where you would expect a reliever to give up a run in any inning. Under Yoda however the pitching has become a core strength. Yudai Ono had a Sawamura Award winning year in 2020 and if it weren't for the ridiculous season Yoshinobu Yamamoto is having for the Orix Buffaloes, Yuya Yanagi would be the front-runner for the award this year. Whatever is happening is working. Unlike Mori's Dragons however, the hitting has been woeful. In the 2018 season, the Dragons looked dangerous with the bat. Dayan Viciedo and Ryosuke Hirata had career-high seasons. The team otherwise just hit well. The same cannot be said for Yoda's Dragons. A mere look at the hitting statistics of our outfielders this year could have you spitting in disgust. Only two regular hitters have an OPS of over .700; Dayan Viciedo and Takuya Kinoshita. Just, awful. It was hoped that the additions of former MLB instructor, Alonzo Powell and former Carp slugger, Kenta Kurihara would help in this regards but so far the reading hasn't been positive.

So with all that in mind, who is there actually available to take over? Perhaps under normal circumstances, more than we know but the main names currently being discussed in the media are perennial contender Kazuyoshi Tatsunami, farm manager Toru Nimura and Yoda himself. Not much to get excited about. Tatsunami has been after the top job ever since Ochiai stepped down. Rumours are that his relationship with former owner Bungo Shirai meant that Tatsunami was frozen out of contention. However, with a new owner it is now said that that doors are ajar for a Tatsunami takeover. The third inheritor of the Mr Dragons moniker has been a vocal member of the media for some time now and even came on as a special instructor last spring to help with the Dragons hitters. Yota Kyoda and Akira Neo is particular were focuses of this instruction. However, what Tatsunami says in the media does not sound like those of a particularly competent manager particularly for the state the team is in. In a way, getting Tatsunami in, finally, and letting him have a go and succeed or fail would at least get the media off the Mr Dragons train finally. I am however not sold on his ability to be a good manager.

Toru Nimura would be, I think, a reluctant recepient of the top job. One positive can be said is that the farm team under his tenure started off very well with the bat. They unfortunately tapered off as time passed, but the promise was there to start with. I quite like what Nimura has said in the past about his players and his approach. He is definitely a manager with a plan for his players and as a farm manager he will know how to get the best out of younger players. However, it does appear that his recommendations to the top team come from very strict criteria on who is ready and who is not. It is possible that Nimura is partially responsible for the lack of youth in the top team as he hasn't judged them to be ready for the task. In a way this can be seen as protecting the players to ensure they work out their trade on the farm. I think for the most part this is probably a good idea, but one then worries if he would actually lead a youth revolution in the team.

I personally think we'll probably see another year of Yoda, probably at a reduced wage, to firstly save some dough, and also just to see what might happen. Most of Yoda's staff's contracts are up this year as well which could see some meaningful chopping and changing. It has been reported that Tsutomu Ito and Yoda have had a falling-out and that would mean at least a new head coach. A new batting and pitching coach on the farm are probably required as well with Ken Kadokura leaving the team midway through the year while Toshio Haru is the only hitting instructor on the farm. Takayuki Murakami, organisational hitting coach, is probably on the way out while there could be further shuffling as well. That gives me some optimism. The hitting philosophy that is trying to be introduced may well take time to stick as well, who knows what another year will bring.

So, I would assume that we'll see another year of Yoda. It's the most cost-effective for the team and I'm keen to see what another year might bring particulary with the team chasing some hitting talent really hard at the draft. It's also worth noting that Yoda was already chosen as the new manager before the 2018 draft where he pulled out Akira Neo's ticket. While the Olympics has delayed the season and any other end-of-season decisions (apart from senryokugai notices apparently), there has been talk that Yoda has sat in on scouting meetings and largely still has a say on team direction. I think this strengthens Yoda's chances of continuing. Somewhat serendipitously, the season running longer into the year than usual may be to Yoda's advantage as much of the preparation for the following season will need to be made now. Why not then give him another year?

With all that said and done however, I still want to do a little thought exercise. This would be for maybe, 2023. I am a big fan of what Hirokazu Ibata says. He speaks very intelligently about the game in a very nuanced way. He's a former all-star, Best 9, golden glove winner and was a key part of the Dragons for almost 15 years. He has great respect among the NPB community and I personally would love to see him get the nod to be Dragons manager at some point. With all that in mind, I spent a little bit of time thinking about what an Ibata led backroom could look like. I've tried to keep to coaches that Ibata has either played with or under throughout his career as well as some links to his alma mater, Asia University.

There should be a few familiar faces here. Kosuke Fukudome, Kenshin Kawakami and Masahiro Araki were all mainstays during the Dragons golden era at the turn of the century. Fukudome is one the Dragons best ever hitters and his influence has been marked this season. I think he'd be a wonderful instructor. Kawakami has a great relationship with Ibata and both of them talk quite often for CBC and on YouTube. Kawakami is another that speaks really intelligently about baseball. Listening to him talk about pitching makes me think he'd be a great mentor for Dragons starters. Araki has shown himself to be a great mentor and coach, so he sticks around. Some more interesting options otherwise. Masahiro Kawai is one of the older staff members here, but the master of bunt was a former farm manager for the Giants and played a key role in luring Ibata to the Giants initially. He has the experience and ties to the Dragons. Ibata played with him at the Dragons and would have interacted with him regularly with the Giants. Akira Eto is similarly one of the elder statesmen of the backroom, but the former Carp slugger has a close connection to Kawai and was part of the backroom at the Giants during Ibata's time there. The other major notable addition here is a sneaky one that wouldn't be appreciated by Tigers fans, Norihiro Akahoshi. Akahoshi is an Asia University alumnus and has a strong affinity for the Aichi region. He seems to be a closet Chunichi fan. While it was hard for me to demote Hidenori, having someone like Akahoshi and Araki working together to teach players how to swipe bases and run the base-paths would be something to see. Lastly, a couple of less noteworthy additions are that of former bullpen master, Akifumi Takahashi as the lefty reliever foil to Kawakami's righty starter coaching. Finally, Fumihiro Suzuki, who currently coaches in Korea was a former catcher for the Dragons drafted in 1998. He has significant experience coaching for the Buffaloes. I think he's be an okay addition as much as I'd like to retain Takeshi Nakamura. Kohei Oda was another option I had thought of.
Overall, this I think is a good mix of coaches from outside the team and from within. Quite a few of them have experience coaching with other teams.

This part got fairly difficult very quickly but I've gone with something that's similar to what the team have had in the past but with some minor changes. Eiji Ochiai was actually someone I'd like to have as first-team pitching coach but I was finding it difficut to get a lefty-starter type to pair with him. So, I've handed him the reigns to the farm team. He's been managing the Samsung Lions farm team in Korea the last couple of years. He's a good character to have around and I think he could be a good manager. This would also allow for a succession should Ibata's tenure not go well. Koichi Sekikawa might be one that's hard to pry away from the Hawks where he's highly valued as a coach, but he and Ibata played together a little bit and his coaching credentials are not to be sneezed at. Kazuki Yoshimi joins the pitching coaching ranks while Eiichi Nakano, currently a bullpen catcher with the team, gets a promotion to bullpen coach for me. He's a former Asia University almunus and played alongside Ibata. Lastly, the only major change is Tadaharu Sakai who was a former Dragons defensive specialist. He's currently a coach with the Rakuten Eagles and would add some experience to the backroom here.
Contracts, family situations and a whole other host of things may well impact the possibilites of these staff members actually coming together. Someone like Eto for example may well not be interested in coming back to coaching. Others like Kawakami and Akahoshi may be happy with their jobs commentating rather than coaching. This was all just based on some fun speculation. I'd be keen to see what others would have in mind for a possible backroom team in the post-Yoda era.
I think we'll see another year of Yoda at least with a reassessment in 2022. If the team can recruit effectively, a couple of good bats could lift the entire line-up. Here's hoping.
Posted by Scott M at Saturday, October 09, 2021