Dragons release 6 in first round of senryokugai notices 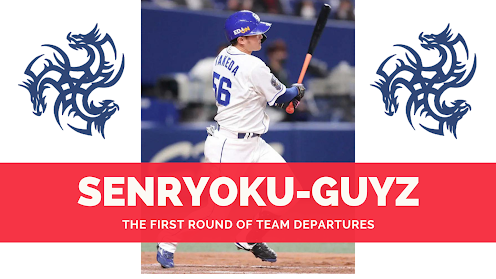 The Dragons have announced their first round of senryokugai (release) notices for 2021. They will have another chance to do so following the draft, but this round has seen 6 players being told they're no long required. Among them are 3 outfielders and 2 pitchers.

This selection of players probably doesn't surprise many. Takeda is perhaps the most surprising of the three to be let go as he's spent the entire season in 1-gun as a defensive specialist. Playing mostly right-field and a bit of first-base, Takeda has been a useful addition defensively. It is odd that the Dragons would let go of a player that has spent the whole season with the top team, but with a significant shuffle required to get new outfielders in, there was no place left for the light hitting Takeda. Masataka Iryo has mosty been a pinch-hitting option, but his statistics are unfortunately underwhelming. If recruitment goes to plan in the off-season with a hard-hitting rookie and a gaijin outfielder getting picked up, then there really isn't room for Iryo who could easily have his role replaced by Kosuke Fukudome or Shohei Kato. Endo perhaps is the least surprising as he had an underwhelming year on the farm and otherwise has failed to impress since his rookie season in 2015.

What does this do for the rest of the team make-up? These three plus the retiring Fujii clears a lot of dead wood. This leaves us with the current outfielders:

This still leaves us with quite a few outfield 'options.' Neo is still listed as an infielder, but I've included him here as he played most of his games in the outfield this year. Apart from it not being pretty reading at the least, I think there are a few players that can fill the roles of Takeda and Iryo next year. Shohei Kato looks the most obvious option for both roles. He has a very good glove and a possibly okay bat. He's at worst, a Takeda and at best, a starting option in outfield. This could not be said for Iryo or Takeda. Fukudome will also hopefully be in a more reserved position next year playing mostly off the bench rather than his rather mammoth contribution this year. As you can see, he has the second most ABs out of any outfielder. Not bad for a 44 year-old but it doesn't say much for the team. Honestly, the team could even choose to trim back from this. Ryosuke Hirata could be living a charmed life and if the team are feeling particularly cut-throat, Masaru Watanabe could alo be in trouble. If the team do well in the draft, I could see them cutting Hirata as a way to save cash as well. Even though Hirata's contract is up, they'll still need to pay him a reasonable amount to stay on. An injury prone 33-year old that has recently been diagnosed with variant angina doesn't seem like a particularly good investment going forward.

I see plenty of cover here for the departures and I don't think the team will be much worse off. That's still 10 players that can play the outfield and even with 3 on the field, that's still 2 that can sit on each bench in 1-gun and 2-gun. If the team bring in a further 3 outfielders in the draft, I could see maybe one more of these 10 being let go.

There's far less to talk about here. Mitsuma is perhaps the most surprising as he had his moments. He always seemed to be on the cusp of something great and didn't quite get there. He has a great fastball, but he just doesn't seem to get it going consistently enough. Unfortunately the former Musashino Heat Bears man will be leaving the team, but he has experessed a desire to continue his career and will attend the tryouts. Taisuke Maruyama was a 6th round pick in 2015 on somewhat of a lottery ticket. His college career had been dogged by injury but the murmurs at the time were that he was a top-2 pick had the injury worries not been there. Unfortunately, the former Toho High School ace failed to really recover from a number of injuries suffered with the Dragons as well. He had been on a development deal. Randy Rosario is a man that simply suffered because of the pandemic. Had he the normal pre-season I'm sure he would have been a great contributor, but unfortunately like Mike Gerber before him, he must bid farewell to the team.

If nothing else, the Dragons have now cleared out the roster quite a bit. Daisuke Yamai and Atsushi Fujii have confirmed their retirements while Mike Gerber has left the team. These players have alread been discluded from the equation while this further 5 (Maruyama's development status means he didn't count) means the team have, I believe, 61 available roster spots. While two of these will definitely be used for foreign players, the team still has 7 spots to play with ahead of the 2021 Draft. Will they actually sign 7 players? Probably not but at least now the option is there. If the team go after their usual 6 players and sign two foreigners, the team will only have 1 spot to play with.  There will probaby be another 2-3 players released to make room for mid-season promotions. If they really wanted to save money, jettisoning Hirata, Keisuke Tanimoto and Shota Ono would make a lot of sense. All three are the wrong side of 30 and would be expecting decent money to stay on another year. Hirata and Ono are wrapping up multi-year contracts while Tanimoto earns a veteran's wage. Clearing those three could save close to $1.5m. Will the team be that petty though? I somehow can't see it happening, but you never know.

In conclusion, nothing of any particular value has been lost in this first round of cuts. Outfield needed to be shaken up and shaken it has been. The three pitchers leaving however are not huge losses. The honus is now on the team to recruit well in the draft.