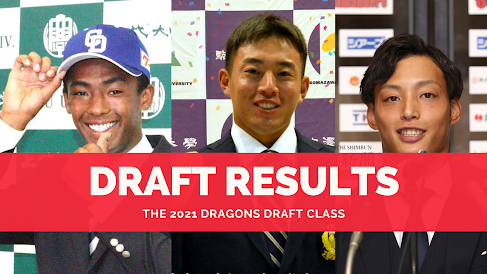 The results are in, and the Dragons have selected six new players to join the team in 2021. These include a healthy smattering of three outfielders, a pitcher, an infielder and a catcher. This has been one of the most position player heavy drafts in the Dragons recent history. The Dragons appears to have taken their hitting woes seriously and not only have they drafted five position players but of those five, three of them are college level hitters.

My predictions ended up being pretty off but I snagged Kenta Bright as our top pick and, although I didn't pick him at 2nd, I had Kosuke Ukai on my ledger. Surprisingly, Tomoya Masaki was still on the board when the Dragons second round of picks came up and I must admit I'm slightly confused as to why they didn't go with him over Ukai. I assume defensive worries are the key issue as Ukai has a better arm reportedly, but why not get the top two outfielders available? A question for later perhaps. Otherwise with my other picks; Kyosuke Kuroyanagi had to wait until the 5th round before the Fighters picked him. Kento Nakamura went in the 3rd round to the Carp while Norihiro Nozaki and Hibiki Yamashiro went undrafted. Very difficult to predict indeed but I consider 2/6 a relative success.

The Dragons drafted in a fairly traditional way, if there is such a thing. Usually the #2 spot has been used for a pitcher in the last few years, but obviously team need here was after a power bat. The #4 spot has been used for a catcher again (Yuya Gunji and Kota Ishibashi were both 4th rounders) while a local boy was taken 5th round (a tradition since time forgot).

Without further ado, here is the basic information of our draftees:


Let's now make a few comments about who the team have selected and also comment about what this does for the team roster. 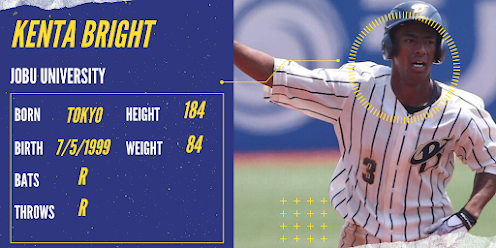 A native of Tokyo, Bright is one of the most athletic players on the card this year. He has a Ghanaian father and Japanese mother and has played in the Tohto League with Jobu University the last 4 years. Defensively still needs some work, but there is potential in the bat to develop some interesting power. A right-handed hitter, I'd assume the Dragons are hoping he'll be starting in right-field come opening day. He's mostly hit in #4 spot for his university and maybe we might see him bat 6th or so in the line-up for the Dragons. 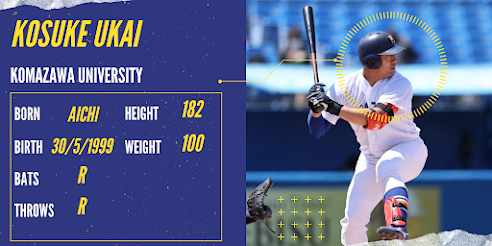 Kosuke Ukai is a big boy with a big bat. Aichi-born, the former Chukyo HS slugger has made a name for himself hitting the long ball in Tokyo for Komazawa U. Weighing in at 100kg, he's going to be the heaviest set player on the team. This year he has started hitting homeruns with more alacrity with 6 in 22 games. The main concern however is his plate discipline as he's struck out 25 times in 80 plate appearances. A strong arm means he's probably at home in outfield while a future at first base might be on the horizon as he gets older. Another #4 hitter for his university, he has mostly played in left-field. Ukai I think is a player in the making that will need work before he's ready. I wouldn't expect immediate results but I hope for some development on the farm with some sporadic appearances with the tope team in 2022. 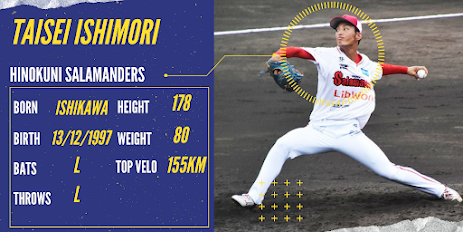 Taisei Ishimori throws a very fast four-seam. The man from Ishikawa has spent the last season with the Hinokuni Salamanders in the independent Kyushu Asia League. A southpaw, Ishimori tops out at 155km/h which is a good few clicks faster than the best any Dragons lefty can do. A good array of breaking balls makes him an interesting prospect indeed. In his university career, Ishimori struck out 121 batters over 102 innings. In the indy leagues, he has taken 63Ks over 36.1 innings of work. What's more incredible is that his K/BB is only 4.22 and his SO/9 is a whopping 15.61. If his stuff translates to NPB, then the Dragons have a very exciting pitcher on their hands. Another lefty that I would assume would probably stay in the bullpen to help out Fuku and Okada. We'll probably see him very quickly. 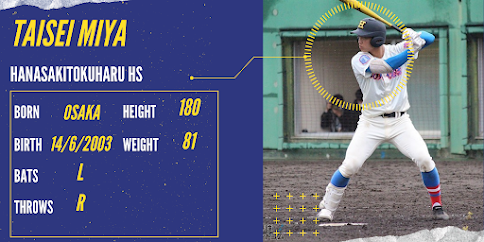 Taisei Miya was a surprising pick. I didn't expect the Dragons to take another catcher given the glut of options they currently have. Miya is a graduate of the presitigious baseball program at Hanasakitokuharu High School, the alma mater of future team-mate, Tatsuya Shimizu. Defensively well established, the lefty-bat can hit the gaps and also contribute with a few extra base hits. A pop time of 1.8 seconds puts him ahead of Kota Ishibashi when he started with the Dragons in 2018. He has mostly hit 5th in the line-up for his school with an impressive 1.115 OPS in 15 games over his competitive career. Miya is one for the future for sure. The Dragons already have an impressive line-up of catching talent at Miya only adds to it. On the depth chart he'll be behind Kinoshita, Martinez, Katsura, Gunji and Ishibashi. 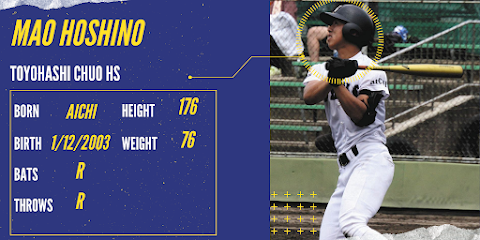 With Atsushi Fujii retiring, it was only logical to add another Toyohashi adjacent to the team. Mao Hoshino, actually from Higashio, is a short-stop. He has good legs, a good arm and a decent hitting tool. In the most recent summer Aichi high school tournament, Hoshino hit .529 with 2 homers over 4 very impressive games. He has 25 homers to his name in his career while hitting from the lead-off position or from in the hole. Hoshino also had 3 other clubs looking at him, including the Fighters so it's perhaps fortunate the Dragons actually picked him up this late.

Last but not least is Yuma Fukumoto. Yet another Osaka Commercial University grad joins the team. His sempais at the Dragons include, Yuki Hashimoto, Kaname Takino and Iori Katsura. Fukumoto is a hard hitter who claimed the MVP in the 2020 Spring and 2021 Fall league. Playing at DH or right-field, Fukumoto has some power but doesn't have a whole lot of homeruns to show for it. His 2021 Fall League season was the most impressive as hit a clip of .350/.435/.425 inclusing 3 x 2BH and 11 RBIs. A graduate of the Chiben Gakuen High School program, Fukumoto has some good pedigree. If nothing else, his addition is a welcome one to add competition and give a bit more punch to the outfield options.
How does this all then affect the team?
Outfielders incoming essentially just replace those that were outgoing. Takeda, Endo and Iryo are all just replaced by Bright, Ukai and Fukumoto. Similarly, the team trades an indy-league righty in Takuya Mitsuma for an indy-league, southpaw, fireballer, Taisei Ishimori. The additional infielder and catcher however might mean another couple of players could be on their way out.
The Dragons rarely keep more than seven catchers on the first team roster and Miya would be the eighth. Similarly, infielders are many and we could see one moved on to accomodate for Hoshino (although there don't appear to be any likely candidates). So, we may still see some shuffling in the next round of senryokugai notices. At catcher, there's a few scenarios. One is that one of Gunji or Ishibashi is going to primarily play the field this year meaning an extra catcher is needed as back-up. The other is that Ayatsugu Yamashita simply hasn't impressed as much as the team were hoping and he could be on the way out. Finally, the other option could be that Shota Ono could be on his way out as well to either be released or retire. In any case, I think we will see another two players leave the team before the end of the year. Overall though, the team has gotten better as a result of the change-over and have certainly powered up over the options that have already been released which is a great step in the right direction.
In my predictions, I had advocated for Hibiki Yamashiro who could play middle infield. However, with Tsuchida being played at second, maybe Hoshino could provide cover in this area. Not as immediate a back-up as I would have hoped, maybe the Dragons are looking to move him away from short-stop. Who knows at this stage. Tsuchida I think is a dynamic short-stop and not playing him there would be a mistake. Hoshino is a lower rated talent though, probably, so he might be shifted himself. It's worth remembering that Masami Ishigaki was billed as a short-stop before he was moved to third-base.
Adding Fukumoto and Bright gives us options for right-field. Bright will hopefully be an immediate contributor while Fukumoto will likely get a good deal of reps in right-field for the farm team.
Overall, I'm not quite as hyped for this draft class as I have been in the past. I'm relieved to finally see outfield and power issued addressed. Something I have been crying out for over a number of years. I'm a little underwhelmed by Fukumoto and Miya as I felt something more substantial could have been done and I'm also concerned about taking Ukai so high. Perhaps the Dragons saw competition for Ukai's signature and decided to sweep in, but when Masaki was still on the board with a similar but more complete skillset, I wonder why they didn't go for him. Having Bright and Masaki in one draft would have been quite a coup, but perhaps the team are worried about creating a logjam with Kosuke Ito and Yuki Okabayashi looking to break into the team.
I'll give this draft a B. I'm kinda skeptical about some of the talent but it could all turn out well in the end. Hopefully the team can really develop some hit tools.
Posted by Scott M at Tuesday, October 12, 2021