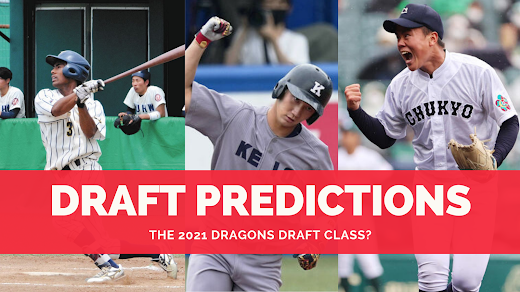 Introducing your 2021 draftees...maybe. I have had some time to read more draft reports and get a better feeling for team needs. The Dragons have not announced a first-round pick like some of the other teams, hoping to keep everyone guessing. From my previous article, I have changed some of my predictions as more information has become available to me and it's here I will make my prediction.

What the Dragons need is something to bolster the well publicized issue with their poor hitting. The Dragons top the league in ERA but are worst in just about every category that uses a bat. What is needed are power bats, and probably more than one or two. Ideally, this production needs to come from outfielders as this is the main area where the team is struggling. I also suggest that the team probably needs another second base option, someone who's maybe early 20s. Lastly, the team could do with a couple of younger arms, preferably a lefty and a righty. This then leads me to this round of picks:

I have stuck with some names and added in some different ones based on where I figure each player can be taken. This means Ukai drops a couple of places (as he isn't as highly rated as I thought) while I've now added in an infielder to give competition for places.

First round should be either a pick between Jobu Univerity's Kenta Bright, or Keio University's Tomoya Masaki. Masaki has the bigger profile, but there are worries over his defensive ability. Some comparisons have been made to former Dragons and Eagles slugger, Takeshi Yamasaki. Left-field could be a place for Masaki until Viciedo can no longer occupy first-base. This however still leaves a blackhole in right-field that could be filled by a foreign outfielder but it's probably easier to fill a gap in left with an international signing. Given the team's propensity to value defense, I can see Bright being the top pick. He's more athletic but still has plenty of punch in his bat. My only concern is that the team might see him as attainable in the second round and then go after a highly rated arm in the first round instead, potentially missing out entirely. I hope this doesn't happen. Bright has said he wants to go to Chunichi so he can work with Kosuke Fukudome.

In the second round, the Dragons should get an early pick so they'll get a shot at some of the better almost first round talent. This includes local boy, Kyosuke Kuroyanagi. He has been the Chukyo University High School ace and shows good velocity on his fastball. Injury I beleive befell him a little last year, but he was impressive in his outings in 2021.

Ukai drops to #3 on my list. His power is unquestionable but defensive ability and plate discipline are still questions. I'd still draft him as high as I could as the potential of that power makes me salivate.

At #4 I've gone with Fuji University's, Hibiki Yamashiro. Fuji U. is a talent stalking ground for Seibu usually, but on the website I frequent, the Dragons are the only ones to make comment on Yamashiro. An Okinawa native, Yamashiro has very exciting hitting statistics in the Tohoku College Leagues and can play accross the infield as well as in right-field. An heir apparent to Naomichi's utility, Yamashiro looks an exciting prospect. The Dragons have no one settled at second base or right-field; Yamashiro could plug either hole.

Fifth round is where I think we'll snag a local lefty. Norihiro Nozaki has been solid for Gifu Commercial High School, one of Gifu Prefecture's traditional top 3. Similar profile to Kenshin Kakikoshi who was drafted a few years ago and is now doing quite well on the farm.

Lastly, and this is possibly my least confident pick is Kento Nakamura another than I had selected in my previous prediction. I'm not sure if we'll be able to snag him so low (maybe Nozaki 6th and Nakamura 5th?) but this would be a good selection to bolster outfield stocks and just give the team more options. Experienced hitter who's apparently good in a pinch, he would definitely make a sound addition to the team.

In other Dragons draft news, despite his future somewhat in the air, manager Tsuyoshi Yoda will be the one pulling out a ticket if the first round goes to a lottery.

Anything after the first two slots is going to be hard to predict but I think this is a relatively realistic rundown of what the Dragons could and should take this year given the reports I've read over the past few days.

The 2021 Draft will take place at 17:00 JST. SportsBull App has broadcast the draft the last few years.