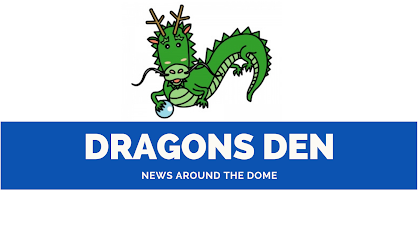 The Dragons as of the end of the trade/registration window on the 31st of August had exactly 1 place left on their full-time roster. Space number 69 (nice) was taken up by Ryota Ishioka who was promoted from a development deal. While we were hoping for a trade to sure up things, this is the team we've been stuck with for the last month and a bit of the regular season. With a mind on the 2021 Draft in October, the team will have to do some significant trimming and decide who they want to keep around.

The Dragons normally sign 6 players to the full-time roster per draft. I would expect roughly the same this year, with that in mind who is the most likely to leave? I will split this into Japanese and international players as I feel that the circumstances are different and need to be treated differently as well. Generally speaking as well, the team will have international signings anyway and I can see any outgoings being replaced by a similar number of incomings.

So, with the number 6 in mind, who can we cut free from the roster? First of all, what key areas need to be strengthened? Well, that shouldn't be a question. It's the outfield. Outfielders not named Yohei Oshima have not been setting the world on fire. Kosuke Fukudome has surprised this year while Masaru Watanabe has recently shown that he could be the soluition in left-field. The problem however, is that the team still lack a world-beater in the corners and it is particularly right-field that I feel needs to be addressed with a college level player that can slot right in. Further work should also be done to bring in younger outfielders to create competition for places. So with that in mind let's think about who can be trimmed.

Fujii has had a long career as a 4thish outfielder and the time has come to pull the curtain. He's 40 and hasn't been seeing many reps on the farm. He has declared he'll be hanging up his studs effective immediately.

Yamai is in a similar boat where I think there's really no more gas in the tank. His retirement has also now been confirmed. Sparse appearances on the farm are all he has to show this year. The team will want to bring in a new arm or two in the draft to bolster options. Yamai leaving brings down the average age of the team to a slightly healthier area.

The two pitchers haven't contributed very much this year. Sato has looked okay at times on the farm, but he's really taken a hit down the pecking order. In the tail end of 2018 he was the team's closer after having some great form down the stretch, but he has unfortunately failed to really build on that promise Injuries have also set him back, but compared to his peers he's really not getting a look in at the moment. His most recent outings with the top-team have been embarassing unfortunately and I wouldn't be surprised to see the team move on.

Hamada is probably best known for being in the same draft as Shohei Otani and Shintaro Fujinami. Hamada was touted as one of the high school top 3 of his draft class along with the aforementioned stars, but injuries have really hampered Hamada's progress. Successive surgeries have impacted his development and his only selling point right now is as a left-handed reliever of which the Dragons have a number of other options. Although still on the young side, if the Dragons need to clear someone out I won't be surprised if Hamada is on the list.

Outfield is where I feel a lot of chaff could be removed. The four listed here are most likely going to be in the firing line. Masaru Watanabe may well have been listed here if not for his emergence down the stretch which will at least keep the team optimistic about his future come the year's end.

Endo, Iryo and Hirata are now on the wrong side of 30.

Endo never really reached the heights hoped for him after his impressive rookie year at short-stop in 2015. After being retrained to play the outfield, Endo became the 4th outfielder for the team. He's still quite mobile in the outfield but the days of him showing his potential are over. Too many have overtaken him with guys like Yuki Okabayashi and Kosuke Ito also breathing down his neck to get into the first team.

Iryo similarly has never really had much about him aside from a bench role of sorts over the last two years. Iryo has also been a pinch-hitter. Iryo has a role within the team as a bit of a senior player that can hit for contact, but I'm not sure if that's going to be enought to save him if the team want to revamp their outfield.

Hirata obviously has the biggest potential out of the three, but he's also been hampered by injuries and form issues almost his entire career. Hirata has had perhaps one good year in the last 5 back in 2018 where he lead-off for Shigekazu Mori's team. This year also marks the end of his multi-year contract. What kind of salary he might want will determine if the team decides to keep him around.

With all this in mind, who would I be looking to ship-off? I'd honestly just about ship them all off. Even if all of them left the club, the team would only have 1 roster space open after drafting 6 players. The only other option would be that the Dragons don't carry as many international players next year.

At present the Dragons have on their books, Dayan Viciedo, Raidel Martinez, Yariel Rodriguez, Ariel Martinez, Randy Rosario and Mike Gerber. Viciedo looks very unlikely to leave despite being in the final year of the 3-year mega deal he earned at the end of 2018. Raidel Martinez is apparently attracting Major League interest, so he might be on his way out. Yariel Rodriguez and Ariel Martinez, have one more year with the team while the team have already farewelled Mike Gerber. Randy Rosario too will perhaps be lucky to stay on, an unfortunate result of the pandemic's effect on the sport.

I think I've outlined a case for players leaving. So let's see what our cull-list looks like: 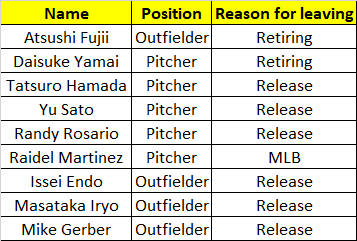 In this case, we've freed up 9 roster spaces giving us a total of 10 to play with. Given this is two retirements and three foreign players leaving, I think it's quite likely that the Dragons will release a further five players if not more. Raidel could stay but the Dragons have seemed to heat up on Frank Alvarez who could be a replacement. Gerber will however have to replaced by another foreign power bat. We'll see what happens there in the coming months. The only other player I'd say that is in danger would be Kengo Takeda but I feel his skillset is something that other players don't have in that he can be a decent defensive replacement in either center or right-field while not being required to get lots of ABs to develop his game as he seems to have plateaued.
I'm going to theorize that the Dragons will likely want to keep about 3 spots open after the draft has finished if the past few years is anything to go on. The assumption also needs to be made that the team will probably sign 6 new players in the draft, again, keeping with tradition. Lastly, and this is harder to predict, we may see some players demoted to development deals to keep spots open on the roster. Candidates for this could be Sho Ishikawa and maybe Shotaro Fukushima and Tsubasa Kato.
Let's break this down a little bit:
If the team goes this way, then that will open up 9 spots on the roster allowing for 6 new signings through the draft as well as keeping 3 spots open for mid-season promotions and the like.
With the above suggestions, the team now has 10 outfielders which is still a lot for what are essentially 6 position over 1-gun and 2-gun. I would almost be tempted to let go of someone else as well. What I hope for at the draft however is that the team attracts at least two power hitting outfielders, an infield power hitting prospect and then probably the usual smattering of pitchers. Luck plays a role at the draft, but if the team are serious about addressing the glaring issues in the line-up, they will go after bats with their first few picks. I've had a look over some of the players the team have been looking at and come up with a list that I think is relatively realistic and addresses several team needs.

Kosuke Ukai is my top pick. He's one of the most promising power hitters in the draft this year. He's also an Aichi native which ticks a couple more boxes. Kenta Bright and Uta Sakaguchi are also possibilities, but I feel that Bright doesn't offer the raw power of Ukai while Sakaguchi is only in high school. Kyosuke Kuroyanagi would be another popular pick from the Dragons backyard. Topping out at 151 km/h I think there's a chance he could go in the second round. Shinnosuke Haneda hasn't been strongly linked with the Dragons, but I think they will need to sign another left-hander. Haneda tops out at around 147 km/h but he throws from some heigh standing at 191cm. Yuma Yasuda has been linked with the team with fans speculating his bat would be better suited in the outfield so a conversion could be on the cards. Kaito Okamoto is another outfielder with power potential that has been hitting #3 in the line-up for Gifu Daiichi. Finally, another outfielder couldn't hurt given how bad our options are, and I thought a modest pick like Kento Nakamura might fill out things. This does however give us a glut of outfield options, but it might be worth it given the unreliability of Hirata and the fact we can't rely on Kosuke Fukudome to fill-in every other day again.
The best laid plans however mean that this probably won't even be close to what's selected however I think the team will strongly be thinking about that top 2. Either way, I've really just picked a class that adds a couple of arms and really beefs up the power hitting stocks of the team.
The team need a refresh. Tsuyoshi Yoda is looking more and more like a manager that will be out the door at the end of the season. His contract is up and the performances of the team have been once again underwhelming. Yoda however has been involved in the scouting meetings for the draft which is confusing should he be moved on, but either way, there's still a steep incline to success even if the Dragons pull off a decent draft to address key areas.