Yippe-ki-yay, maharajah! It's time for another review of what's going down on the farm. With all the coming and goings recently between the 1-gun and 2-gun teams I feel this becomes even more important to help people know why players have been chosen for the firsts and how the blokes that have been dropped are doing. Tetsuya Tani's performances in the 2-gun were rewarded with some appearances against Swallows as a pinch-hitter where he did his job quite well. Just goes to show how form can convert between the leagues.

Today we have a shorter than average wrap-up because the first game scheduled on the 1st of April was cancelled. I'm not sure why, I haven't been able to find any information about it, but my guess is probably rain.

Our games take place in the Carp's regional training field of Yuren in Yamaguchi Prefecture, fairly far away from either team's home.

Game..err..4 was as fairly even venture, but the Dragons got the better of the Carp to run away with a fairly comfortable 3-1 win. One man, one name, "Yudai" started the pitching for the Dragons while Aren Kuri started things off for the Carp. Recently demoted second baseman, Kyouhei Kamezawa started this game along with Fukuda at 1st and Morino at DH.

The veteran "You-die" pitched 4 2/3 innings and conceded the only point that the Carp would muster in the game. Yudai, threw down one strike-out and conceded 7 hits in a pretty average time on the mound. Takeshi Kaneko, who has been given time as a closer in the 2-gun of late, would finish of the inning Yudai was pulled out of and faced just the one batter whom he struck out. Past starter, Shinji Iwata, the winning pitcher, took two innings, faced 6 and struck out two while conceding no hits. Achira gave up one hit but took a strike and walked one in his inning. Finally, the save would be credited to Daisuke Sobue who struck out two of the 3 batters he faced.

A decent performance. If we see some shakiness in the 1-gun bullpen, I can see Sobue getting some more time on the mound this year. His velocity alone is a big plus. Apart from Fukutani and Naylor, no other Chunichi pitcher in the 1-gun can hit over 150km.

Morino and Fukuda both had the unfortunate pleasure of striking out twice today with only Morino making a contribution with a hit. Kamezawa was productive with a hit, a walk and a sacrifice hit. The veterans however were largely outdone by a few of the younger guns. Hiroki Kondo would open the scoring, and thanks to a bad throw, made the score 2-0. Shota Tomonaga and Masaru Watanabe contributed with 2 hits a piece with the latter scoring the former.  Masato Matsui as well, catching today, claimed two hits to make a marked contribution. No fielding errors today capped off a good day on the farm in a pretty standard win.

Game 5, was to be a different story as rookie #1, Shinnosuke Ogasawara got knocked about a bit to continue his inconsistent beginnings at pro-level. Kamezawa, Akasaka and Fukuda would fill out the first-team hopefuls while Shota Ohba, a cash signing from Softbank Hawks in the off-season, made his, I believe, first appearance this year. The final score of 7-1 strangely mirrored the effort made by the first team against the Swallows the day before. 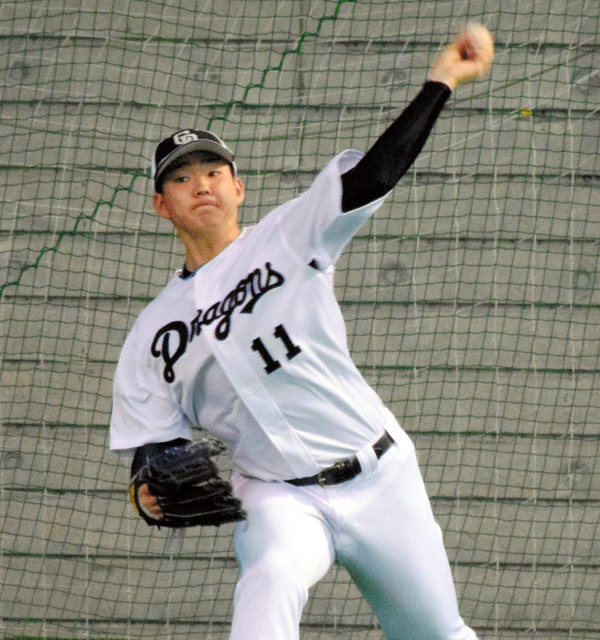 As mentioned, Ogasawara was back to his spray-gun best. No doubt, experience is extremely important at this stage of his career, but I think he'll be disappointed with how things have gone so far. The rookie let in 3 runs in his first inning and a further one in the second before giving up a further 2 in the 4th inning. Ogasawara claimed 2 strike-outs, walking 4, giving up 6 runs and 4 hits, one due to an error. He pitched up 86 deliveries in just 3 2/3 innings. A very unfortunate run.
Yuu Satoh, another rookie, would relieve the shell-shocked Ogasawara and calm things down as he only allowed two hits and struck-out one in 2 1/3 scoreless innings. Shota Ohba would take to the mound afterwards and allow a further run. He ended with one walk, 2 hits and 1 strike against 6 batters
Kentaro Nishikawa finished things off with a tidy inning as he dismissed his 4 batters, giving up 1 walk and taking a strike.

Fukuda's star would shine today as the first-baseman hit 3 and scored the only RBI of the day when he sent Furumoto home to score in the 9th inning. Hiroki Kondo continued his impressive form as he hit two and walked once in his 4 plate appearances. There was otherwise no other real performances of note as the batting line-up failed to produce just as much as the pitchers did. After this game however, Fukuda would end up averaging .321 in the 2-gun which then lead to a call-up to the 1-gun to replace captain, Ryosuke Hirata who was suffering from some hip soreness in the first game of the season against the Yokohama Baystars. Taiki Mitsumata also earned a call-up following the ills of Issei Endo who was de-registered from the 1-gun team.

Toshiya Okada will be linking up with the seconds soon and Jordan Norberto is expected to be promoted for the game against the Baystars to replaces wayward starter Tatsuro Hamada in the rotation.