This week was marred by controversy over manager, Tsuyoshi Yoda's comments over the use of "omae" in the popular chance theme, "South Paw." Yoda, who sees the word omae as disparaging and disrespectful toward the players expressed his distaste for the word suggesting that the chant be changed to use the players' name. Omae (お前) is a colloquial version of saying "you." It is normally used when someone of a higher position is talking to someone of a lower position or if two people of equal position are talking. It comes with it a connotation that the speaker is higher in status than the person being spoken to. Whatever your position, the Dragons ouendan have ceased the usage of the song, based on the tune of Pink Lady's song of the same name, which has caused some uproar among fans and has even brought the attention of national talk shows discussing the appropriateness of such language.
I like the song, but conversations like this are healthy to have as a society. Some players have come out saying that they don't really mind while it has been pointed out that many other clubs use chants that include the word "omae". Whatever the case, this seems to have had a poor effect on the team as they were trounced by the Giants at Tokyo Dome. 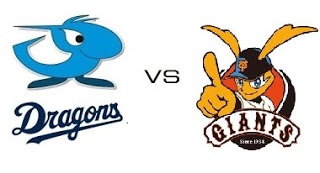 The series started of with a Tomoyuki Sugano shutout and ended demoralising 5-3 loss where Enny Romero continues his rich history of giving up homeruns at Tokyo Dome. With Masato Matsui being moved on in a trade the previous day, Takuya Kinoshita was brought up to the first team.


Game 72
Tomoyuki Sugano has been without his usual swagger this year for the Giants, but he kept the Dragons scoreless through 9 in a 115 pitch CGSO where he took 6Ks.
Young Tatsuya Shimizu started the game but leaked two solo homeruns to Toshiyuki Kamei and Christian Villenueva  in his first 4 innings. The Giants would score their remaining two runs off the pitching of Toshiya Okada as Hayato Sakamoto and Yoshiharu Maru both hit solo efforts into either side of the stand.

Shuhei Takahashi was the only one hold his own with the bat with a 2-hit game in a relatively unimpressive, nothing more to say, loss.

Game 73
The Dragons and Giant went neck and neck exchanging blows in a thrilling encounter that ended with a walk-off win for the Giants. Kazuki Yoshimi was pulled after 2 innings after he showed he doesn't have what it takes outside of Nagoya Dome. Toshiki Sakurai similarly for the Giants only lasted 3 innings as he gave up 3 earned runs to Dayan Viciedo and Yota Kyoda.

The Dragons would extend take the lead in the 7th via Kyoda initiating a squeeze and a Yohei Oshima single. Christian Villenueva would have other plans as he evened the scores while Toshiyuki Kamei also came to the rescue with a lead taking single in the bottom of the same inning.

Takuya Kinoshita would give the Dragons a chance with his first homer of the season bulleted into the left stand. An unfortunate and ultimately uncharacteristic error from Shuhei Takahashi on a Daiki Masuda bunt allowed Akihiro Wakabayashi to score and claim a walk-off victory for the Giants.


Game 74
Do you remember Romero throwing his glove in disgust? I think he's gotten used to seeing his pitches in the Tokyo Dome stands as he gave up a game winning grand slam to Hayato Sakamoto in the 2nd inning which saw a megaphone ejected from the Chunichi ouendan.

Ryosuke Hirata would score Toshiki Abe on a sac-fly in the 5th but a solo shot from Seiji Kobayashi in the 6th cancelled out the reply in quick time. Abe's double combined Nobumasa Fukuda scoring on a grounder from Takuya Kinoshita put the Dragons within touching distance of a win but they were snugged out by an efficient Giants bullpen in another, solid, loss.

The biggest blow for this game would come after it ended as Joely Rodriguez pulled up sore after pre-game practice. He was later de-registered from the first team. I personally had been hoping Rodriguez would get some rest during the interleague period so we could make use of the DH and he could do some low intensity stuff on the farm, but it didn't happen and here we are. Hindsight it 20/20 though but I felt he was being trotted out a few too many games in a row.
On the bright side, Kento Fujishima looks likely to come up as a replacement.