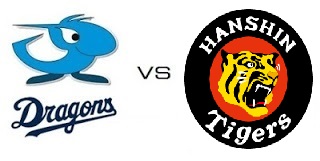 After a few days off, the Dragons would return to action at the Nagoya Dome in a quick and tasty series against the high flying Tigers. The Dragons would extend their streak to 5 wins with the top of the rotation showing marked resiliency to take out two solid wins.

A big 2nd inning from the Dragons off the pitching of Koyo Aoyanagi would be just about all the team would require to finish off the Tigers. The Dragons batted around the order where Takuma Kato claimed the lead with a double while Ryosuke Hirata, Yota Kyoda and Yohei Oshima would put the lead to 5. Masataka Iryo would push the lead to 6 before Seiya Kinami scored a consolatory RBI in the 7th.  A relay of Joely Rodriguez and Raidel Martinez would close out the game.

Yuya Yanagi pitched out 8 scoreless innings for no run support while Hiroto Fuku was tagged with the win after the game went to the 11th inning where, in rather anticlimactic fashion, the game would be decided on a Raphael Dolis wild pitch to allow Ryosuke Hirata to score in a walk-off win.

The Dragons only managed 2 hits of a staunch Hanshin pitching effort, but the Tigers would the the maestros of their own destruction giving the Dragons a somewhat undeserved win.  Yuya Yanagi struck out 10 in his 8 innings in another wonderful performance. He has a 0.93 ERA with 34 strikeouts in 29 innings against the Tigers this year.

In other interesting stats, Shuhei Takahashi seems to try his hardest with Yanagi starts as he's batting .455 with the former Meiji Uni captain on the mound.

As part of All-Star selections, Shuhei Takahashi got the call through the players vote while Yuya Yanagi and Yota Kyoda received an invitation from the manager meaning we have 3 Dragons at the 2019 ASG this year!
Posted by Scott M at Monday, July 01, 2019