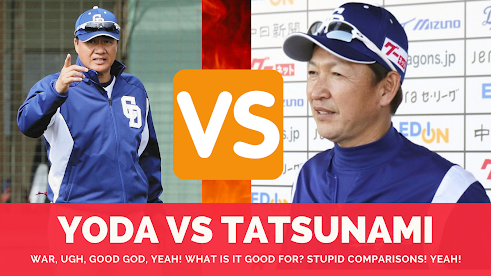 Something short and sweet. I previously talked about Kazyoshi Tatsunami putting together an All-Star backroom. I decided to look at the data and see how many wins this dastardly team of coaches would put together if they were in their hey-dey. To make this spicier, I decided to compare this with the outgoing coaching team of Tsuyoshi Yoda. I'm using WAR to make these comparisons.

For fairness sake, I've included the same number of position players and pitchers for both teams. I've chosen the players based on how well I could wedge them into a position and given precedence to players with higher WAR totals. Unfortunately for Atsushi Kataoka, who played exclusively in the infield corners, there isn't a space for him in our team. Both Morino and Nakamura have higher career WAR totals.  I've had to otherwise be a little creative to make this a "team". I have put WAR calculations for the peak of the coach's career and then a career total next to it. The year indicated in the 3rd column is the year they had that peak year in WAR.

This team has a very chunky middle of the order. Tatsunami, Nori Nakamura and Morino make for a very solid line-up. Overall, a pretty solid line-up on paper if all of these guys performed at their peak. The starting-pitching doesn't have a lot to it, but the relief makes up for it a little bit. I was a little shocked that Tatsunami ended up having higher WAR than Nori Nakamura over the course of his career, but I guess Tatsunami's longevity helped in that regard.
So, with the baseline now set, what about Yoda's backroom?

Unlike the Tatsunami backroom, this team has it's strength morseso in it's pitching. There's a little more balance to the side. Surprisingly somewhat is that the career-year WAR is actually higher largely in thanks to Hideyuki Awano's spectacular 1989 season. Another gem  I found was Motoyuki Akahori's 5.4 WAR season in 1992 as a reliever which actually eclipses Takuya Asao's MVP season in 2011. I'm not sure how accurate the data is now! Unfortunately, with no great first-baseman to fill in, Yoda-gun has to sit a -0.6 WAR earning Hiroyuki Watanabe on first-base.
Over the course of a season, Yoda-gun has Tatsunami-gun beat, but the latter will win the WAR with some glittering, long-lasting careers.
Posted by Scott M at Monday, November 15, 2021