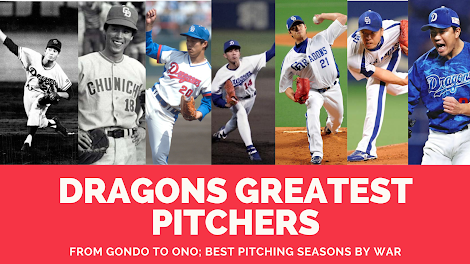 I have been playing around with a statistics database and decided to put together a little retrospective on the Dragons pitching staff over the years. The Dragons have been blessef with any number of excellent pitchers in their history, and it is here that I'd like to examine some of the best seasons, as calculated by wins-above-replacement (WAR). While not the definitive statistic, WAR can go a long way to help us understand how good a player was relative to his peers.

I have capped the dates at 1960 as data before then for WAR is incomplete. I've also not included any pitcher with a score of 4.5 WAR or lower to include. Firstly, I will list each "leader" of each decade since the 1960s. Baseball has changed and I think it only fair to judge players in each era. I have also put together a more definitive list of single-season WAR leaders into a small list to show you what some of the best pitching years in Dragons baseball have been. 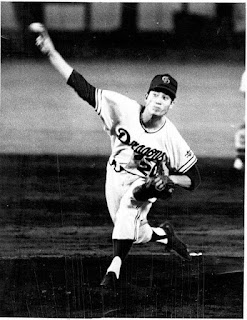 Hiroshi Gondo entered folk-lore with the saying "Rain, Gondo, Rain, Gondo, Gondo" as the only thing that stopped him pitching was the rain. In 1961, Gondo's rookie year, he threw a painful, 429.1 innings over 44 starts which included 32 complete games, 12 of them shutouts. Gondo went on to win the Sawamura Award and the Rookie of the Year award for his mammoth efforts. The load took it's toll however as Gondo only pitched for 3 more seasons before converting to the field as his arm all but fell off. 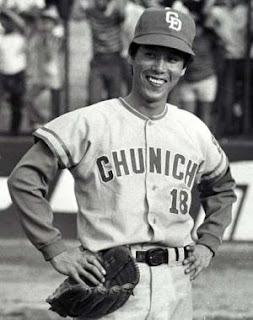 There's a few interesting candidates here, but it's Mitsuo Inaba who claims the top spot. In 1972, Inaba started in 35 games, pitching 261.1 innings for a 2.76 ERA with 14 complete games including 8 shutouts. A 20-11 mark in decisions would prove to be a career high for the righty who would move to the Hankyu Braves in 1977 and have further success. 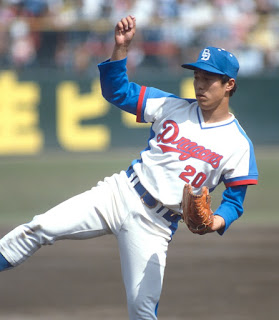 This one surprised me a bit, but Tatsuo Komatsu in 1985, his Sawamura Award winning year, was to be the best of this era. Over a relatively modest 25 games started, Komatsu pitched 210.1 innings for a 2.65 ER, 17-8 record and 172 strikeouts. Komatsu actually played a further 8 games as a reliever appearing in 33 games in all. Alongside Genji Kaku, the 1985 Dragons team had a pretty formidable 1-2 at the top of the rotation. Komatsu would play for a further 9 years with Chunichi having another excellent year in 1987. 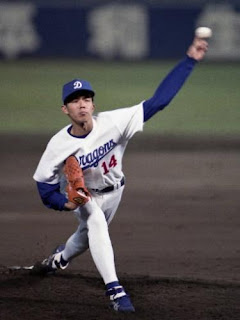 I knew this one as he's one of my favourites. Shinji Imanaka pitched a peach of a season in 1993 where he captured the Sawamura Award. Masa Yamamoto was his rotation mate that similarly had a career year in WAR. Imanaka dazzled his contemporaries with his slow-curve and 148 km/h fastball. Imanaka started 30 games with 14 complete games including 3 shutouts. What's perhaps the most impressive is an 8.9 SO/9 as he fanned 247 batters over 249 innings. One of the best of the best, Imanaka was an amazing pitcher to watch. Unfortunately, much like Gondo, his longevity would be affected and while he still put up a further four 10+ win seasons, he ultimately succumbed to injury at age 30. 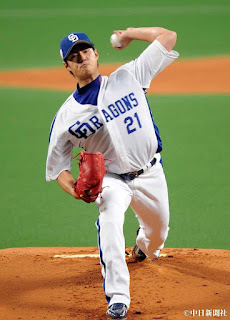 Again, another surprise but this one is edged out by former Major Leaguer, Wei-Yin Chen. Alongside Kazuki Yoshimi, Chen showed himself to be the MLB calibre talent he was with a remarkable 2009 season. Chen pitched in 24 games, hurling down 164.0 innings. He would show amazing control to strikeout 146 batters for a miniscule, 0.933 WHIP. While only claiming an 8-4 record, Chen would put himself in the shop window for a move to the Orioles in 2012. 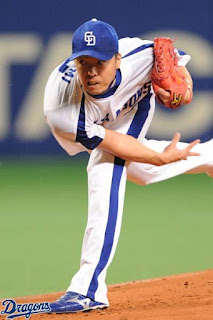 Chen's partner in crime, Kazuki Yoshimi in 2011 put up the best WAR during the lull that was the 2010s for the team as a whole. Yoshimi would have an 18-3 record with a 1.65 ERA and 0.87 WHIP over 190.2 innings. If it weren't for a certain Masahiro Tanaka, Yoshimi may well have been the Sawamura Award winner in this year. A career best season for the then staff ace, it's perhaps not a surprise he's on this list. After a good 2012, injuries got the best of Yoshimi but he still pitched 100+ innings for the Dragons in 2016 and 2018 before retiring in 2020. 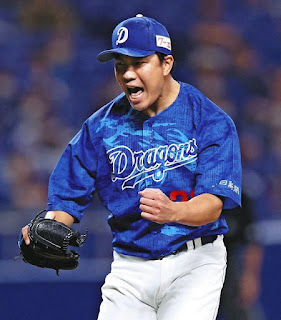 We've really only just started this decade, but Yudai Ono's 2020 Sawamura Award winning year was pretty good. In a shortened season, Ono threw down 148.2 innings over 20 starts. His 6 shutouts and 10 complete games rang among the best conversion of a CG to SHO out of any of these pitchers. Striking out more or less a batter per inning, Ono also has one of the best SO/9 out of any of the luminaries on the below list.

Here the top 15 pitchers by WAR in Dragons history based on their best season:

You can now see why I decided to group these seasons by decade. You can definitely see that the 1960s were still dominated by pitchers that could throw a lot of innings. If you take away the top 3 however, you have a fairly decent list of pitchers that still did things in largely fairly recent times. Hiroshi Gondo's season may well be one of the highest WAR seasons by a pitcher in NPB history. Tatsuo Komatsu ranking so high surprised me while Kenshin Kawakami similarly ranking so low was also a surprise. A few new names came to my attention from this list in Minoru Kakimoto a side-armer, who looks like the ultimate ground-baller based on his statistics, and Mitsuo Inaba who was a regular contributor to the  rotation through the 1970s.
I hope you enjoyed this little delve into the past.
Posted by Scott M at Sunday, November 28, 2021