3 Young Dragons to be excited about in 2021 (Position Players)

A belated hello to all my followers, it has been a very busy few months for me. I've had to work on a PhD research proposal, pack-up my house and become a full-time dad. It's been tricky to find time to throw a few words up, but here's a simple little article to get the year started. There are 3 position players I'd like to talk about that could well have a role to play in 2021 after building their way up. 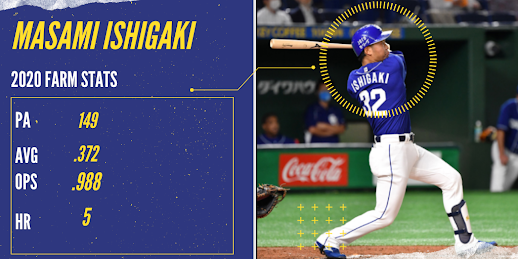 Masami Ishigaki was so hot on the farm last year he was burning down crops. The 4th year, 23 year-old infielder found some pop and drilled in plenty of RBIs in a breakout year for the Yamagata-born slugger. Ishigaki was called up to the first-team squad half-way through the season where he hit his first homerun off Angel Sanchez as a pinch-hitter.
In the off-season Ishigaki was taken under the wing of Rakuten power-hitter, Hideto Asamura. Ishigaki appears to have learned some things from Asamura as he has impressed in camp so far and looks like he's bulked up.
Originally billed as a fast, power-hitting short-stop, it's unsure where he will end up playing. He has seen reps in the corner infield, but I'd personally like to see how he'd go in the outfield corners or even second-base.
Ishigaki is someone I want to see a lot more of this year, the only thing stopping him will be the form and health of those ahead of him in the pecking order.

The dearth of young options in the outfield makes Okabayashi stand-out, but he's certarinly building a case to be a part of the first team this year. Okabayashi was originally drafted as a pitcher, but the Dragons registered him as an outfielder with the NPB after signing him proper. Still so young and raw, the man from Mie prefecture has surprised many with his strong armed defence, and deft bat-control.
The power obviously isn't there yet as to be expected, but he's got some tools that make him a very exciting prospect indeed. Given the uncertainty over the involvement of Ryosuke Hirata and to a lesser extent, Mike Gerber, there could be a corner outfield job available if the stars align.
Okabayashi is more of a 2 years in the future kinda guy, but he's the most promising centre-field prospect the organization has with plenty of room to grow. Oshima might have another year or two left in his legs to fill in the centre-field spot, but Okabayashi's emergence may just allow Oshima to play a little longer as the Dragons have someone worth giving time in the field to. 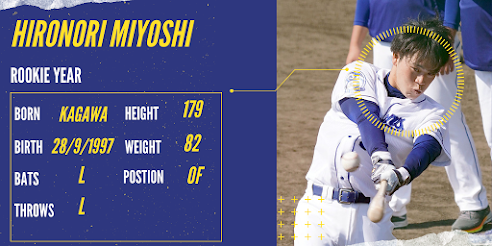 Miyoshi was drafted 6th in 2020, but he looks the most likely to make an immediate impact after being called up to the 1st team spring camp. Although among a host of other outfield hopefuls, Miyoshi impressed in batting practice with solid swings and a really attractive looking batting stance.

Miyoshi, like Okabayashi, was once a touted pitching prospect, but when he entered the industrial leagues, he decided to convert to the outfield. He has a strong arm and a solid bat that according to reports, packs a punch.

It might take a while for Miyoshi to get used to NPB pitching, but again, like Okabayashi there is a chance for him if Gerber and Hirata aren't ready by the time the season rolls around. At the very least, we'll see him with the top team this year and if he gets a few pinch-hits he might well stick for a wee bit longer than some might think.

That's my little taster of some players to look our for who might break out given half a chance. Ishigaki seems the most likely while I think Okabayashi and Miyoshi will be given chances.