Rookie Watch
All the rookies have reported in to their dormitories with much of the attention falling on 1st draft pick, Akira Neo. Neo's reputation and potential to be the best thing since miso tonkatsu, has brought in waves of media and fans to practice games to the point where at times pointless looking articles surface asking Neo how he's going to combat the flu season. For your information, he plans to gargle and wash his hands frequently. 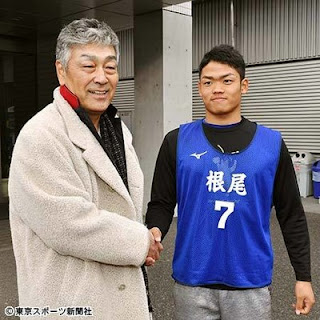 It hasn't been all bad however, as one of my favourite stories to come out of camp so far is former Dragons short-stop, Masaru Uno coming out to visit Neo. Uno is the Dragons all-time homerun leader and was also a bearer of the number 7. Media have been in contact with Uno frequently given the parallels between him and Neo and he finally had the chance to meet the Gifu-born infielder earlier this month. He was generally encouraging, asking Neo to play in a way befitting of himself. Uno also had the similar experience of being the incumbent when a young star was brought into the team in 1988. Kazuyoshi Tatsunami was a short-stop out of PL Gakuen high school and Uno was told by then manager Senichi Hoshino that "(Tatsunami) will play whether he hits or not." Perhaps some advice for Yota Kyoda too in that regard? Uno moved to second for the season and then moved back to short in 1989 before leaving the team for the Marines in 1993.

Unfortunate news is that Kodai Umetsu experienced some discomfort and has been put on a light training program. The number two pick suffered from a right shoulder impingement which has delayed his progress a little bit. One was hoping that he would be in the mix for the starting day rotation, but that was perhaps a bit premature. Nonetheless, he seems to be okay and is recovering.

Other rookies Kota Ishibashi and Kenshin Kakikoshi caught a bout of the flu earlier this month, but both recovered fairly quickly. Ishibashi unfortunately was diagnosed after catching his first bullpen as a professional.

In other news, Shuhei Takahashi, who became a father in November, will be
appointed as team captain for the upcoming season. The 25 year old who was drafted first round in 2013, played his first full-season last year at second base and has now been given the added responsibility to lead by example. He says he wants to be a leader that is approachable and wants to create an environment that makes it easier for junior players to speak up. He has also especially promised support for Neo as a former high-school first rounder with high hopes on his back. Yohei Oshima threw his support behind the young captain saying that "Shuhei is a mood maker" while Issei Endo made comment that "if he doesn't overthink and hits the ground running I think he'll go in a good direction." Shuhei himself commented upon being made captain "The first thing that need to be done is make sure I do my own things right. In order to make sure that my team-mates and the fans aren't asking "what are you doing?!" I need to take on responsibility and (a level of) self-awareness."

Ryosuke Hirata was the last to hold the captaincy in the 2016 season under Motonobu Tanishige's tenure and you have to look back to Toru Nimura in 1992 to find an example before then. It's not an oft used responsibility in this day and age but it might just help Shuhei gain an air of responsibility as a senior member of the team who can provide that bridge between the growing pool of high-school aged players and the more seasoned pros. Certainly an interesting decision by Yoda and his staff.

Fame! I'm gonna live forever!
January also brings with it the ballot for the Japanese hall of fame and there were two former Dragons inducted into the 2019 class marking the 26th and 27th inductees that have either coached or played for the Dragons during their careers.

Mr Dragons the third, Kazuyoshi Tatsunami was elected based on his success as a player while Hiroshi Gondo, a man with the legend of throwing over 400 innings in his rookie season, received recognition in the "expert" area of the hall for his work as a coach and as an analyst. 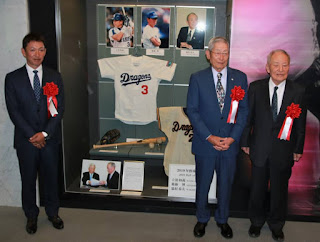 Tatsunami was part of the famous PL Gakuen High School teams of the late 1980's where he was drafted first round by the Dragons at the 1987 draft. He would win rookie of the year honors in 1988 and would go on to be an integral piece of the Dragons during the 1990's. He was a 10 time All-Star and 2 time Best 9 winner. He was perhaps best known for his ability not to hit for power, but to pick the gaps where over his 22 year career, he captures the NPB record for career doubles. A face of his generation alongside the likes of Ichiro Suzuki, Kazuhiro Kiyohara and Hideki Matsui, Tatsunami certainly ticks all the boxes for the "fame" category. Never really the best player on his team, Tatsunami had a long and successful career beloved by fans the country over. He has been pining for a return to pro baseball as a manager but has successfully carved out a niche as an analyst and occasional author for the time being. 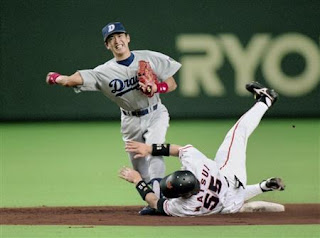 Hiroshi Gondo started his career in the 1960's and in probably best known for his rookie season in 1961 where his feats created the the well known phrase "Gondo, Rain, Gondo, Gondo" due to him pitching what seemed like every day. At age 22, Gondo threw 429.1 innings in 44 starts and 69 games played. What is perhaps more amazing is that he did it for a 1.70 ERA and a 0.911 WHIP. Unsurprisingly, this season not only got him rookie of the year honours, but also the Eiji Sawamura award. He backed up this season with 362.1 innings in 1962 where he had a 30-17 record and a 2.33 ERA, capturing most wins in the Central League. Gondo's rate of innings steadily declined and by 1965 he arm was spent, converting to the field where he mostly a sub .220 hitter.
After coaching with the Dragons, Buffaloes and Hawks, Gondo would later rise to prominence as manager of the Yokohama Baystars where he led them to their first Japan Series appearance and win in 38 years in 1998. He is still one of only two managers to win the Japan Series with Yokohama and one of only three to make a Japan Series appearance with the team. Gondo has otherwise also been prolific as a commentator and analyst where he is attributed with, among other things, predicting the rise of the change-up. 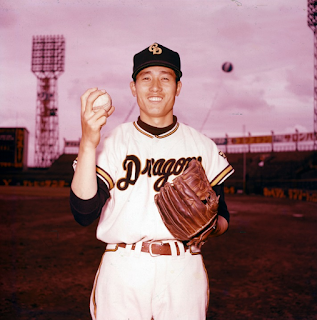 Overall, there will be no Chunichi fan unhappy with this but much of the English media coverage has not so much been about Tatsunami and Gondo as it has been about the omission of former Kintetsu Buffaloes and Yomiuri Giants slugger, Tuffy Rhodes who has been largely ignored by voters. This however is a story for another time and I do recommend checking in on Jim Allen for more commentary on the topic.

Springtime for Yoda in Okinawa

The squads top and bottom squads have been decided for spring training that commences in Okinawa at Chatan and Yuntan tomorrow. Akira Neo was long ago locked in to start with the top team but he will be joined by fellow rookies Akiyoshi Katsuno and Kaname Takino. The full compliment of the foreign legion will start with the top team with only development contracted Ariel Martinez starting with the farm team.

The Dragons will also be giving a test to Sandy Brito, a Dominican RHP who was released by the Tampa Bay Rays organisation this year with a view to signing him to a development contract deal.

A quick look over both squads and I think it's obvious what the coaches are looking at. There are a lot of players in the top team that I'm sure Yoda and his team want to get familiar with. Guys like Ishikawa, Abe, Tomonaga, Iryo and Sugiyama in particular will need to be assessed. Iryo and Tomonaga in particular may be lucky to have a job next year if they can't break out this year, so it's important for the new management team to make sure they're not going to lose anyone important. After a week or so though there'll be some shuffling of players between the two squads. This is even more likely with players like Ogasawara and Umetsu coming back from injuries.

Fujii, Hirata and Oshima will start with the bottom team but will eventually head up the top when the practice games start getting more serious. The three senior outfielders have been given time to tune-up by themselves and won't be really be a part of the squad proper. They'll also be among friends as many of their former team-mates make up the coaching staff on farm team which is another reason that has been cited for their tune-up to occur in Yuntan. 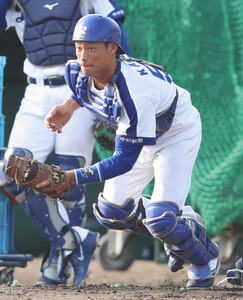 Otherwise, I don't think there are any other real surprises with this squad but I
think there will be something interesting happening with our catching this year. Something tells me that Matsui won't be in favour as much this year with Takuma Kato earmarked for more attention this year. Takeyama at least shouldn't be much more than a bullpen catcher this year (one can only hope) while Iori Katsura and Shota Sugiyama really need to turn their careers around as they get closer and closer to the scrap pile. Katsura has been unlucky with injury and Sugiyama fell out of favour under the Mori regime. This will I think be one of the key focuses leading into the new season.

Other key talking point will of course be the opening day rotation which could look a bit different depending on how things go. By my thought, the only locks are Yoshimi and Kasahara. Matsuzaka will I think likely make it, Ogasawara may not be ready in time, Yanagi will be there if he shows good form in camp while Enny Romero, Kento Fujishima and Akiyoshi Katsuno will likely be the others hovering in the background for the final spots.

The closer role will be an interesting battle as well which has three likely candidates in a fitter looking Shinji Tajima, a fireballing Hiroshi Suzuki and the second coming of Kazuhiro Sasaki, Yu Sato. (I'm joking, I don't think he's quite that good) How the closer role shapes up will in turn affect the set-upper position where we'll see a combination of Joely Rodriguez and the above.

News as of today has put shade on Neo's start with the top team as he seems to have pulled his calf muscle and has since been put on an individual training menu. He may well be two weeks away from returning to full training.

The first practice game for both teams will be against KBO's Hanwha Eagles on the 11th and 16th respectively while there will be inter-squad games on the 3rd and 4th to start things off. First NPB opposition will be the Marines on the 14th for the first team in Chatan while the second team faces the Baystars on the 19th in Yuntan.

The new season is still 2 months away, but we're getting closer and the excitement is building. A new manager and staff hopefully means a new beginning for many of the players that haven't had their chances yet which I hope means a flashier more successful Dragons team in the near future.
Posted by Scott M at Thursday, January 24, 2019