As we're getting close to the end of the year, the Dragons have been busy cleaning up the wage structure and re-signing players to deals.

Senior Director, Shigekazu Mori has been in the Carribean negotiating deals and looking at new talent.

Onelki gone, Enny in
Onelki Garcia, who put up 13 wins this year for the Dragons, had previously agreed verbally with the Dragons to a multi-year deal. However, due to his agent getting involved demands apparently skyrocketed out of the realms of the Dragons' interest. New demands apparently had Garcia asking for a multi-year deal at ¥200,000,000 per year (roughly $1.75M USD) which the Dragons management balked at, and let Garcia walk.
The lefty hurler had previously stated that Chunichi "blue runs in (his) veins" but apparently the insistence of an agent to get more money out of the Dragons has ended the association prematurely.

Not to be deterred, Shigekazu Mori jumped immediately into negotiating with what seems like a direct replacement, that being former Tampa Bay Rays and Washington National fireballer, Enny Romero. Romero has been pitching in the Dominican Winter League and a deal was struck yesterday to bring Romero to the Dragons on a one-season ¥50,000,000 deal just like the one that brought Garcia to the Dragons last year. Romero seems to have a similar profile to Garcia in a lot of ways including most recently pitching in the majors for the Kansas City Royals and mostly as a reliever. The exciting part about Romero is his max-velocity hitting around 160 km/h which is something Garcia isn't or wasn't capable of.

All of Romero's experience in the majors has come out of the bullpen, but the Dragons will likely be wanting him to start. Romero has started over 20 games in AAA mostly with Tampa Bay earlier in his career, but it is more than conceivable that he'll be viewed as a starting piece unless some Japanese pitchers find their mojo (I'm looking at you, Ono). 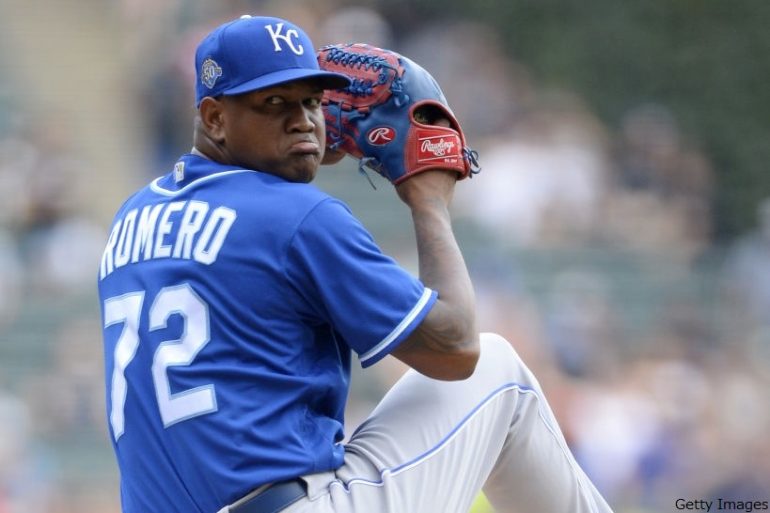 Whatever Romero's role will be among the pitching staff, he looks like he has the goods. He posted a 1.33 ERA in 54 innings and a 0.870 WHIP in the Dominican Winter League this year where 10 of his 11 appearances have been starts. His SO/9 stands at 9.0 and he didn't give up a homerun. Dominance in the DR can be a good indication of things to come. At MLB level, his career ERA sits at 5.12 over 146 IP. His most recent jaunt in the Pirates minor league system has looked far less encouraging however as he posted a 6.23 ERA over 4.1 IP with the Indianapolis Indians (AAA) as well as giving up 3 runs in his one and only appearance at A+ ending his time with Pittsburgh with a 13.50 ERA.

Romero has a lot of upside. His career AAA stat line looks more encouraging with a 4.43 ERA over 191 IP. Strangely however, his SO/9 looks better at MLB level which may be because of his primary utilization as a reliever. A WHIP of 1.382 in AAA would put him in with the better relievers and starters with the Dragons this year which is a little bit encouraging, but aside from this year's Winter League, Romero hasn't had a start since 2013.

Romero primarily goes to school with a reliance on his pacey fourseam that hovers in the mid 150's on average topping out at 164 km/h. A mix between fourseam and slider seems to be the key to taking strikeouts for Romero but he also has a cutter that he has used to varying success. Earlier in his career with the Rays he also frequently mixed in a change-up but he has limited his use of this pitch as his career has progressed.

This again, like most of the signings last year, is low risk high reward. Worst case, Romero gets injured, but we're only out ¥50M. Best case, he's lightning and supports the team in the rotation or the bullpen in the best possible way like Garcia and Rodriguez last year.

Overall, I think he has the profile to succeed in the NPB, but like with any foreign signing it will depend on how he adapts.

Viciedo back in 2019 on big money contract


Dayan Viciedo has reportedly agreed terms to a bumper contract with the Dragons according to Jon Heyman. 3-years for $10M looks like a very generous offer from the Dragons and represents a large increase on the 2-year $3.5-$4M deal that Viciedo had previously been on. For a players that has only really excelled for one season, I'm worried that this locks away a lot of money for a a lot of years. Then again, by the time Viciedo's deal is up, we should be in a good position to challenge for the Central League regularly again meaning that the money may well be freed up by the time some players need to get paid.

I'm on the fence about this one, but Viciedo has repaid the faith after his battles with his US citizenship and he has now bonded pretty well with the team. He will have played for the Dragons for 6 years by the time the deal is up which would be one of the longer serving foreign players in recent years. Locking Viciedo up for his prime years looks good on paper, but I can't get out of my head the niggle of the Ernesto Mejia contract at Seibu that has proven to be a bit of a money sink.

Numbers changes
There have also been some moves in the jersey numbers department as shifts were made to accommodate for Daisuke Matsuzaka shifting to the 18 and Kyoda switching to 1.

Matsuzaka gets back his "ace" number that he wore for Seibu, Boston, Softbank and for the Japanese national team. This will no doubt drive more shirt sales particularly with new uniforms also announced for next year.

Tomonaga gives up the 1 to Kyoda to take up Kudo's 62 much in line with Tomonaga's previous comments at contract negotiations to be the next Kudo for the team. Kyoda takes up the 1 as an homage to his idol, Takashi Toritani of the Hanshin Tigers.

Taisuke Maruyama falls down the pecking order with a move to the nice number of 69 while the newly promoted Masaru Watanabe picks up the 31 vacated by the retired Kei Nomoto.

New draftees officially unveiled
Also, the press conference for the new draftees came a long and they new boys are  looking snazzy. 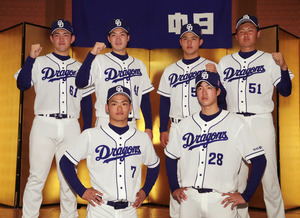 The new uniforms certainly jump out a bit better here and they're looking really good to my eye. Neo and Umetsu look quite focused in this shot while I like the half smile form Katsuno as well.

The significant number goes to Neo of course who wears the 7 last worn by Masahiko Morino. The giving of the 7 to Neo has been pretty well known for a while now and it's gotten as far as former barer of the number at short, Masaru Uno. Uno was the last Dragons regular to wear the 7 at short-stop and the slugger holds the Chunichi record for career homeruns. There's a lot of pedigree that comes with the number and Neo looks like someone who will do it justice in the long-term.

Kodai Umetsu takes up the 28 that was vacated by Taisuke Maruyama. Through history, there have been a few familiar names with the number including Taiwanese major leagure, Wei-Yin Chen who wore it for a season as well as Shinji Iwata who was a pitching coach in 2-gun last year. The longest to bare the number however is Yujiro Miyako who also coached the 2-gun pitchers last year but had a semi-successful career as a starter in the mid-1980s. If not Sho Ishikawa, I think Umetsu could have his eyes on the 20 in the future. I hope so anyway.

Akiyoshi Katsuno I think gets the most fitting number in the 41. Takuya Asao of course is the most recent and probably most famous to hold the jersey. Like Asao, Katsuno is a Tokai native, a graduate of the industrial leagues and a very successful right-handed pitcher. I'd also throw in that they're both pretty handsome.

Kota Ishibashi takes on the 58 which became vacant after Tetsuya Tani's retirment. The last catcher to hold the jersey was Daisuke Tanaka who joined the Dragons in 2006 before departing in 2014.

Kenshin Kakikoshi takes on the number that Shunta Wakamatsu left behind. Another number with some connections as Wakamatsu and Kakikoshi joined the Dragons straight out of high school, both are from the Tokai region and both are pitchers.

Lastly, Kaname Takino takes the 51 that Kyoda left. Issei Nakamura was the last outfielder to hold the jersey and he had a modest career with the Dragons before moving to the Buffaloes where he saw some time at the plate.

Overall, there's a lot of interesting stories behind the numbers.

Now we truly enter the dark end of the season with individual training and new years preparation.