Spring training members have been announced for the hard slug in the Okinawan sun. The Dragons, like every year, have split up the roster into two groups with one representing the "1st team" and the other representing the "2nd" team. These two groups never end up reflecting what the roster looks like on opening day, but it does give you a bit of an idea of who the coaches want to look at.

The second team, although mostly for the younger players, does also help rehabilitate more senior members of the team where they may join first team training during the off-season anyway.

Well, let's get straight down to it. Here is the roster for the team going to Kitatani where first team training will take place.

No huge surprises here. Mori previously mentioned that he wanted all the university grads from the 2016 draft class to be with the first team. Only minor eyebrow raisers would be Mizowaki and Ishioka who played very well in the Taiwanese winter league. Ishioka can play across the infield while Mizowaki mainly stays in the middle areas. Both are quick, athletic slap hitters who, one would hope, could show off their credentials to replace Masahiro Araki in the long term at 2nd base. Also worth noting is that Viciedo is still registered as an outfielder, no need to worry about that. There has been talk that Viciedo could play left-field to allow for Morino or Fukuda to come in at first, but he'll likely primarily be a first-baseman. Issei Endo as well is no guarantee in the infield, as he is apparently in the midst of being trained to work in the outfield.

So, you can probably already have a good guess what the second team at Yomitani is going to look at, but let's go through it anyway.

*Players listed with (D) are on a development contract and are ineligible for the first team roster.

Only real surprises here are maybe Fukuda, Araki and Ogawa. Ogasawara is on the mend following his nagekomi induced elbow injury and I can only assume that Araki has been thrown in the second team for guidance and at the expense of some newer guys that the first team staff want to have a good look at while Fukuda is apparently recovering from an injury. Ogawa I think too has had his spot taken by Kasahara in the first team, but that doesn't mean that he won't feature again this season. He was one of our best relievers last year mostly as a LOOGY.

Training starts on the 1st of February where training sessions will be interrupted by some practice games here and there with other teams that come to Okinawa to train. The KBO often has the majority of it's teams in the vicinity, so we have a few friendlies lined up against Korean opponents like we did last year. Last year, some of the games were broadcast on the team's UStream account along with some training sessions, but I haven't seen anything scheduled just yet. Keep an eye on my twitter for news in that regard or just check the channel periodically.

As for the games here's a very bare bones schedule (all times are JST):

I'll end this post on an interesting note I saw regarding how Mori was seeing the team shape up and who he was in his thinking for his regulars in the 2017 season. I did up this depth chart a month or so ago, but it looks as though our Mori has some slightly different ideas. Here's what I proposed:
Now, this is a little bit more detailed than it needs to be and I have updated it a little bit after some discussion with some other fans, but essentially this is how I see us in 2017. However I caught a news segment with the very candid Mori, who apparently just tells the media everything, which contradicts my thinking a little bit. 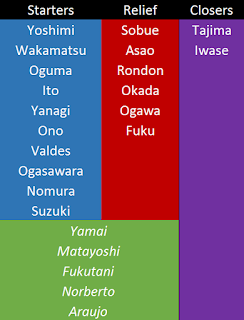 Firstly, the pitching, this is what was presented by Mori on a Dragons...show thingy..segment. Most interesting parts for me is the inclusions of Ito, Nomura and Suzuki as starters this year. Mori half joked on the program that he was going to trade Ito if he didn't shape up and apparently Mori had included the Nagoya born hurler in a proposed trade deal in this off-season. While the trade didn't go ahead, Ito has a chance to prove himself this year. He's been with the Dragons an awful long time now and if he's not becoming a regular this year, he'll probably never do it. Nomura and Suzuki have done fairly well in off-season training and in the Chinese Winter league. Both are former #1 picks and I guess there is a bit of pressure to use them both as well.
Other point of interest here for me is that Tajima and Iwase are the only two pitchers currently in contention for the closing role. I don't personally agree with either choice unless Iwase can reach some semblance of his former self. Tajima could well grow into the role and most closers do start off in relief but it does irk me that someone like Rondon who throws fire and has experience as a closer in AAA isn't being considered for the role at this stage.
Finally, just an interesting part, but those in green are players being considered for relief and starting roles. Nothing terribly surprising there. 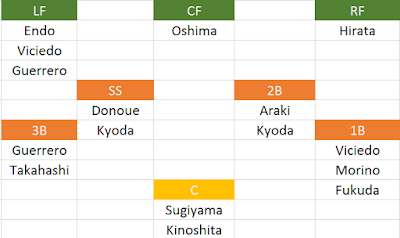 Here is what was proposed for the batting line-up. Most interesting take away for me was that Mori asserted that while 3B was Takahashi's to lose, he would be just as happy sticking in Guerrero at third if he didn't think the youngster was up to scratch. Probably a good thing for Takahashi given he didn't really have any competition for his spot last year. Hopefully this spurs him on even more.
Issei Endo is firming for a spot in the outfield following his transition from short, and Mori also let fly that it would be feasible to put Viciedo out in left-field given the right circumstances. The Dragons have some fairly good options at first base so we might see that position rotate a little bit through the season depending on who's hot. I've even heard rumours that we might see Guerrero at 2nd base in more "attacking" line-ups. Would certainly be fun to see Viciedo, Guerrero, Fukuda, Hirata and Takahashi in the same team, but I'd be afraid of giving up 10 errors a game.Well, I doubt it would really be that bad, but I can't imagine putting Guerrero at 2nd base given his atrocious record when fielding.

Well that's how we're shaping up going into February. Let the excitement begin. As I mentioned previously, keep an eye on my Twitter and the Dragons UStream account for any movement on broadcasting of training games. They may not be offering it this year, but fingers crossed. Had a lot of fun watching Viciedo hit dingers against KBO teams last year.