The Curious Case of Shuhei Takahashi 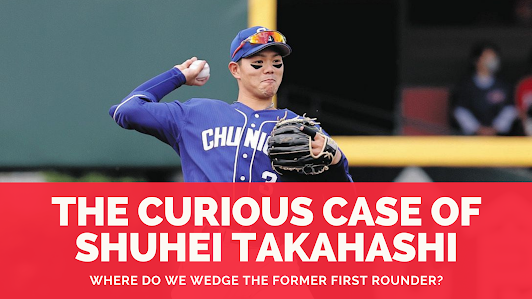 Tatsunami's monstrous attempt to play Shuhei Takahashi at short-stop against the Lions last night is telling of a few things, most of which is there isn't a place for Takahashi in this team. Shuhei missed out on a number of months with an injury to start the season but now it seems there are better options at his two preferred positions of third-base and second-base.

There's a number of issues that are preventing the former regular's use and here I would like to run through a few of them. 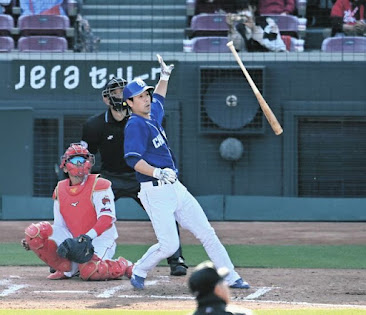 1. The form of Toshiki Abe

Abe had a pretty bad year last year, but this year, the Iwate-born infielder has been one of the Dragons' hottest bats. He's currently hitting a .275/.344/.450 slash which is one of the best among Dragons hitters. His splits are also a bit strange for a right-handed hitter as he's only hitting .238 against lefties but in a small sample size of 21 plate appearances. He's otherwise striking .281 against right handers. Shuhei has traditionally been a good hitter against righties and last year he was abysmal against lefties. A platoon situation therefore is off the table somewhat at second base. Plus, let's face it, Abe is slugging at a level that is beyond what Shuhei normally musters and in a team that lacks big hits, taking out Abe would be suicidal. 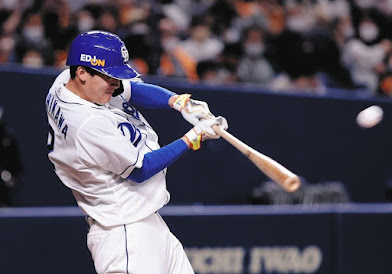 2. The development of Takaya Ishikawa

Out of all the position players in the Dragons organisation, Ishikawa has by far the highest ceiling. A third-baseman that hits for power and is an above average defender is a prized commodity and seeing him develop and ensure he can be that superstar the teams needs in future is important and in particular a mission of Tatsunami's this year. Ishikawa has been typically inconsistent for a young hitter this year and has been slashing a modest .228/.269/.423 this year. While the slugging potential is certainly there, the on-base ability hasn't come along just yet. Only 7 walks in 135 plate appearances is somewhat telling of where Ishikawa is at with his plate discipline, but he doesn't strike-out and awful lot either (26 this year) which means he's getting contact but perhaps just not on the right kinds of pitches.

When we look at his splits however, he is only hitting .215 against right-handers in 107 PA while, in a much smaller sample size, hits .313 over 16 PA against lefties. Ishikawa is a potential platoon candidate with Shuhei based on these numbers but we must take into account two things. Firstly, there just don't seem to be a lot of PAs against lefty pitchers in the Central this year compared to the inverse. Secondly, you want Ishikawa at this stage in his development to face everything and everybody so that he can adjust and get the experience so he can be better at hitting right-handers; this is a tack I think the Dragons are definitely taking. So in this respect too, finding time for Shuhei, who offers little power but probably better on-base skills, is not really a prime candidate.

Shuhei has shown a willingness to move around the diamond throughout his career to get opportunities. First coming up under Morimichi Takagi, there were attempts to play him at short-stop to replace the departing Hirokazu Ibata. Shuhei was a bit exposed at short and ended up being billed as a third-baseman, trapped behind Hector Luna. Once Luna left the organisation however, Nobumasa Fukuda started providing power from the hot corner, and Shuhei was then given an opportunity at second-base where he was competent but still looked like a WWI-era tank turning double plays.  We all know that he has an elite glove at third-base. The diving catches and neat footwork have been somewhat of a trademark, but at the moment team need is not at third, it is probably at short-stop if anywhere. Unfortunately, Shuhei is built like a power-hitter and is not the kind of guy you want at short-stop long-term. That being said there's really no-one banging on the door to be the team's next short-stop.

Takahashi is essentially the odd-man out at the moment. He can't play short, but is probably capable at just about every other position across the diamond. However, what does Shuhei bring to the team? Good corner infield defense and on-base skills. Given Ishikawa is a competent third-baseman that can bring in extra bases, this limits Shuhei to play third. Second base is currently occupied by the team's hottest hitter and another that is more skilled at getting extra base-hits. The question is, what do you do with Shuhei? If this were the MLB, there'd bit a strong case to trade Shuhei to maybe bring in a potential short-stop but I don't think the Dragons would part with one of their team faces so easily.

What is the solution? Well, it might just sort itself out. Patience with Ishikawa may dwindle and that might force Tatsunami's hand to play Shuhei at third more often. Abe could get injured or drop-off, and that too would allow for Shuhei to be first-up at second-base. At the current point in the season there just doesn't seem to be a proper space for him unless you are using him as cover to give Abe and Ishikawa rest-days which again, seems kinda unlikely for the Dragons or an NPB team to do.

Let's all agree, that no matter what happens he should never appear at short ever again.

Other news: Yakyu Cosmopolitan on YouTube and I collaborated on a video. They have used a bit of my analysis for their video on the rise and fall of the Chunichi Dragons. Please give it a watch.