The Dragons took on the Pacific League cellar dwellars, the Orix Buffaloes, in their next series. The Buffaloes are a team that would probably be bottom in either league. They had two top line starters taken from them in the off-season in Chihiro Kaneko and Yuki Nishi while the line-up itself is far from intimidating.

Before the series began, Shuehi Takahashi was awarded the MVP for the month of May as he batted .417 with 3 homeruns and 29 RBIs. The first such award of his career.

A chance to win a series, the Dragons went to Osaka optimistic of a result and walked away with a series win.


Game 58
The first game of the series was decided is less than convincing fashion as a wild pitch from Taisuke Kondo allowed former Buffalo, Taiki Mitsumata to advance to second before he was scored by a Yohei Oshima single.

The Buffaloes only run of the game came in the 6th inning to level things up after Atsushi Fujii had give the Dragons the lead in the 2nd. It wasn't even to come off the Buffaloes' bat as Keisuke Tanimoto had issues locating his pitches as he walked in Shuhei Kojima.

A low scoring affair where you can't really say even the pitchers dominated. Yoshinobu Yamamoto on the mound for the Buffaloes was probably the most outstanding player in the game as he threw down 7 inning and 6 Ks. Takuma Achira put in some good work as he got through 5.2 IP for just 2 strikeouts.  Toshiya Okada would however claimed the win while Joely Rodriguez and Raidel Martinez closed things out. Martinez appears to be the new closer after the team had fiddled around with the late innings relief.

Game 59
Yudai Ono would put in another quality start as he guided his team to victory.
Taisuke Kondo would once again be the villain for the Buffaloes as he gave up 4 earned runs. The Dragons vastly out-hit their opponents 13-2 in a deserved victory. 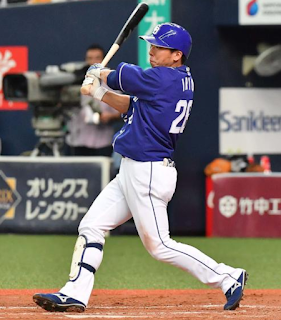 Takuma Kato's RBI single in the 2nd inning would give the Dragons an early lead that would be immediately pegged back in the bottom of the 3rd via Kodai Sano who equalised and Shuhei Fukuda who gave the home team the lead. Yohei Oshima would put the team on level terms when he scored Masataka Iryo in the 5th but it was an explosion of runs in the 8th against Kondo that would secure the victory. Yota Kyoda would give his team the lead with a single into left with bases loaded. Masataka Iryo would 2-up his team-mate however when he hit a base-clearing triple to blow the lead out to 4 run. Some shaky moments from Joely Rodriguez in the bottom of the inning would spice up the match-up but a 3 up, 3 down inning from Raidel Martinez ensured a comfortable win.

The star of the show, apart from Ono, was surprisingly, Masataka Iryo. Batting lead-off he managed a single, two doubles and a triple including the all important 3 RBI triple to seal the game late on. Yohei Oshima, Atsushi Fujii and Yota Kyoda all chipped in with 2 hits a piece.

Game 60
The final game of the series would be one to forget as a poor outing from Raidel Martinez decided the game. Daisuke Yamai (Known to some as 病 (yamai; same reading as his name but means "illness") would be paired up with Masataka Iryo (医療; iryo; same reading as his name but means "medicine") where one hoped the latter would help the former to lead the team to victory

Yamai was able to get through 6 innings with only a Stefan Romero homer blemishing his record. It was however to be an inning that would undo all of the Dragons hard work as 2 more runs were bled by Toshiya Okada and Daisuke Sobue.  Thge Dragons had taken a 3-0 lead in the top of the inning through a Shuhei Takahashi grounder and a Nobumasa Fukuda RBI single with loaded bases.

Eager to atone, the Dragons went on the offensive against experienced closer
Hirotoshi Masui where, with two outs on the board and runners on 1st and 2nd, Fukuda came again to the rescue with sweeping 2-base hit to give the Dragons a 3-5 lead going into the bottom of the 9th. Raidel Martinez would however botch it as he loaded the bases, walked one in and had Masataka Yoshida claim an RBI on a ground-out to even the scores. Stefan Romero would give the Buffs a walk-off win with a single into left field scoring Shuhei Fukuda.

Iryo did his best to medicate Yamai's innings as hit two singles. Dayan Viciedo went 3-3 to claim a modasho while Nobumasa Fukuda was the most study, going 3-2 with 4 RBIs.

Say what you might about the maligned, Hiroshi Suzuki, but he never surrendered more than 1-2 runs per outing. Suzuki seems to be able to mentally reset himself even if he gives up runs whereas Martinez, at least in this case, seemed to get nervous.