Weekly Dragons Wrap: Yokohama shuffle, Swallows in the countryside (9th May - 14th May) 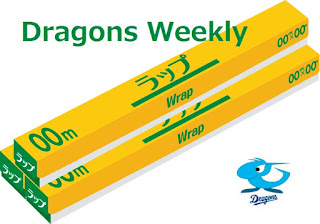 The Dragons would be out in the countryside a few times this week as the first game against DeNA took place at the picturesque Nagaragawa stadium in Gifu city to Nagoya's north while a shortened two game season in Ehime's capital of Matsuyama with the Swallows capped another round of regional romping.
If the Dragons are to be anywhere near the right end of the table at the close of the season, these are the teams they really need to beat.

Shota Suzuki grabbed his first professional win as he showed how to take strikes in an impressive, albeit short, outing.
A Hamaguchi wild pitch in the 3rd allowed the Dragons to take the lead while Donoue and Oshima knocked in further runs to make 3-0. Viciedo then further added insult to injury as he slammed his 5th homer of the season to make it 5-0.

Alex Guerrero would continue his good form in the 4th, joining his Cuban comrade with a fence clearing thwack to put the home side up 6-0.

There would be return fire from the Baystars through former Seattle Mariners slugger, Jose Lopes as he hit a 2-run homer to give the Yokohama side hope and put an unfortunate footnote to Suzuki's fantastic start.

Hirata would add more in the 7th but it would be the 'Stars Miyazaki who added one more off the erratic pitching of Elvis Araujo, but the game was closed out by Junki Ito to mark a satisfying win.

An interesting omen to take from this win, in the last 10 years (I think it's 10) when the Dragons have won in Gifu they've gone on to finish either 1st or 2nd in the Central League. While that seems like a pipe dream, at least the mystical is on our side.

Shinnosuke Ogasawara made his long awaited return to the starters mound against his hometown team. It wasn't to be the most successful of outings, but it was yet another story of the batting line-up not backing up their guy in a low scoring game.

The 'Stars took the lead through a Kuramoto 2RBI single in the 4th and they further extended their lead in the 5th through a Tsutsugo homer.

The Dragons tried to get a look in through Kamezawa in the 7th through his sac-fly, but the line-up failed to rally under the pressure of the Yokohama bullpen.

"Walks will haunt" should be the theme of this game as the Dragons gave up 7 free bases in their 9 innings. The bats didn't perform either as only 4 of the line-up made meaningful contact, one being from the pinch-hitting Kudo. Nothing too inspiring.

Yudai Ono threw down a meaningless 9th inning supposedly in attempt to get him back into the swing of things for a return to the starting rotation, but I do wonder how fruitless this venture might be.

Raul Valdes would return to the mound still searching for some reward for his efforts but he must have done something to someone in a past life as he was once left without any reward.

Jose Lopes would give the 'Stars a perfect start as his solo homer in the first inning of the game.

The Dragons would however get themselves in front in the 4th inning as with bases loaded, Viciedo stepped up to the plate and drove a single into left scoring two. Shuhei Takahashi would then follow up with his first RBI of the year from a sac-fly to put the Dragons 3-1 up.

It would all however come undone as with a change from Valdes to Okada, Toshihiko Kuramoto would take the latter for a trip over the fence to level the scores at 3-3.

With Lopes on 2nd, a Sugiyama misfield allowed the Venezuelan to advance to 3rd where he was scored by a Tsutsugo swipe to give the pride of Yokohama the lead.

While the Dragons would attempt to get back into the game, they failed once again to break the Baystars bullpen as a series loss was confirmed in the 9th inning.

A fairly disappointing series apart from the opening game win but I think the 'Stars are stronger than they were last year if you discount Tsutsugo's form. The pitching is harder to breakdown than it once was and the additions of Wieland and Patton in particular seem to have sured things up.
Viciedo continued his superb form as he is starting to strike a lot more often with RISP. A few more homers have been added to his repertoire alongside Alex Guerrero which has certainly added more excitement to the games.

A 2-game series over Saturday and Sunday in Shikoku's Ehime prefecture against the Swallows would be next up with the Dragons once again hoping to snap a streak and hopefully topple a fairly inconsistent Swallows line-up.

8 powerful innings from Yasuhiro "Ryan" Ogawa was not enough for the Swallows to plow through a win as the Dragons snatched a win at the death off the otherwise reliable Ryo Akiyoshi.

Keiji Obiki would open the scores in the second with a 2RBI single but the Swallows would be pegged back one through Alex Guerrero's 7th homer of the season in the third.

The trendy Tokyo team would extend their lead through Takeuchi in the 7th but a 3-run homer from Dayan Viciedo in the top of the 9th gave the Dragons a 4-3 lead where Shinji Tajima took save honors in a snatch and grab win.

Katsuki Matayoshi had another good shift as starter. Depsite giving up 10 hits he restricted the Swallows line-up to only 2 runs. Shinji Tajima continued his untarnished record against the Swallows as well having yet to concede a run in 5 games this year.

It was to be almost a complete reversal on the previous game's result as it was Yudai Ono who threw away 8 well pitched innings of Kazuki Yoshimi's work.

The Dragons took the lead though an Oshima sac-fly in the first but the Swallows would even things up in the second through Nishiura. Both sides would keep each other honest throughout the later exchanges in the game with Yoshimi holding things together for the Dragons, and the Swallows bullpen doing their job. Going into the 9th with scores even, Yudai Ono was given a chance to take the game into extra innings but the wayward starter loaded up the bases with walks before giving up a walk-off grand slam to Takahiro Araki to end the game and crush any confidence anyone had about Ono being a starter.

Very much like the previous game, everything was decided with a last inning homer. Neither win was particular just, but it seems as though karma evened everything out in the end.

Two very closely fought games that could have easily gone a different way on both occasions.

Another "eh" kind of week in baseball from the boys in blue, but there seems to be a growing strength within this team as the dust settles around what kind of line-up the management is happy with. Sticking it out with Viciedo and Guerrero seems to be paying off while the patience shown with Yota Kyoda is also paying dividends as he slowly builds his batting average to put his best foot forward to be considered a ROTY candidate. If Kyoda does succeed in getting the award, he would be the first Dragons outfielder since his idol, Kazuyoshi Tatsunami who won the award in 1988.

Also, just for a bit of fun, there's a really talented artist on Twitter that's a Dragons fan. Here's one of the illustrations they produced for the series against the Swallows in Matsuyama. It features Doala, Tsubakuro, some local Ehime mascots and the Ehime Mandarin Pirates mascot, Mappy.