Ins, Outs and Roundabouts: Staff Appointments, Senryokugai's and the Lash

Well, now that the draft is out of the way it's time for more news.

The team is starting to shape up for next season and there have been a few developments on the playing staff and to the backroom staff.

Doi is a 72 year old, 15 time NPB all-star, Seibu Lions legend who has been coaching on and off for the best part of 3 decades. He was brought in as special help toward the end of the 2016 season to help with our batting ills and now he has been given the job full time. He was reportedly recommended by Ochiai to teach the Chunichi batters "the old way" of hitting. It's another Lions connection through Mori but this one kind of make sense given his involvement in the shadows before. Doi has been appointed our new head batting coach.

Doi oversaw the development of Kazhiro Kiyohara (525 career HRs) at the Lions and Takeya Nakamura (330 career HRs) as well among others.

This is an interesting appointment. Moriwaki was the manager of the Orix Buffaloes between 2013 and 2015. Since then he's been out of a job, but he's now been appointed the infield and base running coach for the first team. I don't really know what to make of the appointment but he lead the Buffloes to second in the Pacific League in 2014 so he can't be completely terrible. Should be another experienced head to help lead the team.

Tamura is an interesting one as he coached the Dragons as part of Ochiai's staff between 2007 and 2011. Not surprisingly, this is a guy that Mori has worked with closely before. He has been working with the Softbank Hawks as battery coach but has now been appointed to work closely with our catchers.

Another brought back from the depths. Narahara had been working with the Lions until he was released from his contract. Mori asked him to come to the Dragons and he'll be starting his second stint with the team following his last term between 2007-2011. Seeing a pattern here?
He's going to be our infield defensive coach.

Looks like Mori's getting the band back together that was so successful under Ochiai's reign as coach. I guess familiar faces are what he's hoping will get the Dragons back to challenging again.

Our foreign band has been sent back home for the most part with Ricardo Nanita, Drew Naylor, Anderson Hernandez, Juan Jaime and Leyson Septimo all being told to pack their bags, see you later, thanks for all the fish.
Nanita spent 2 years with the Dragons and really shone at times but at 35 with average defense and a history of injuries, he was never a great option to keep. Drew Naylor is cut after getting injured early in the season and never recovering despite showing signs of being a good pitcher here and there (he was dubbed the "Swallows Killer" due to his good performances against Yakult) while Anderson Hernandez, the longest serving of the 5, just has too much competition for his spot now. Jaime never played in the first team and was perhaps unfortunate to fall victim to a season ending injury in March while Leyson Septimo was perhaps the biggest pretender of the bunch starting one game, doing nothing and being promptly never seen again.

Dayan Viciedo, Jordan Norberto and Raul Valdes remain as the only foreigners still wanted by the Dragons and it is probably likely all three will stay but that will depend on what Mori finds on his scouting missions.

Senryokugai'd and you're to blame

Along with the foreign legion, a further 4 Japanese players have been told that their contract won't be renewed. Tomohiro Hamada, Seiya Nakagawa, Tatsuro Hamada and Masashi Yamamoto were all told they weren't worthy of the paper their contract was printed on. Nakagawa leaves after being drafted on a trainee contract last year while the remaining 3 will resign trainee contract in order to get back into first team thinking. Tatsuro Hamada is perhaps the biggest fall from grace having been the 2nd pick for the Dragons at the 2012 draft and lauded as part of the "Big 3" high school pitchers of the year alongside Shohei Otani and Shintaro Fujinami. Tatsu will also be undergoing shoulder surgery in the off-season with a hope to getting his career back on track next year.

In other news however, Takuya Mitsuma is all but assured of being registered for the first team following his good performances in the farm this year and in the Phoenix League. 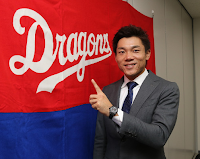 It is official. Hometown hero, Yohei Oshima is staying with the Dragons! After being given a multi-year deal at the third time of asking, the centre-fielder who was second in the league in hits this year has decided home is where the heart is and will be showing his handsome face at the Nagoya dome for the majority of the season once more. This is a great capture for the team as there was clearly no one else that could jump in and fill the void. Hopefully this will spur Oshima on to do even better things with the bat next year.

Ryosuke Hirata is still undecided and while it was reported that the result of his negotiations would be made public at the same time as Oshima's, it appears that
talks have hit a snag. Another meeting was due on the 2nd of November, but it is unclear as to how well that will go just yet. The FA market is open now so we'll just have to wait and see.

Update: As of the 6th of November, Hirata has confirmed he will be staying with the Dragons after signing a multi-year deal with a significant 70 million yen (roughly $670,000 USD) pay bump. He was apparently convinced to stay after hearing Club Spokesman Nishiyama discuss how they were going to strengthen the team going forward.

In other news, the Dragons are looking to add more firepower to the bullpen as Mori flies overseas to chase a closer in the Dominican Republic or Cuba. There have however been discussions with the owner that the pitching is "lacking" and we will be looking at options on the FA market. Baystar's starter and talisman Shun Yamaguchi has been a name floated about as well as Takayuki Kishi from the Seibu Lions. Both would command fairly good salaries, but it is said that money would be available for the right signings. I think a more realistic option would be Hawks reliever Masahiko Morifuku who hasn't been pitching as much in the first team lately and is from Toyohashi in Aichi. He'd also provide a senior head in the bullpen which is probably what Mori is after.

The fruits of the off season so far has been a cartilage injury to Shinnosuke Ogasawara who nage-komied over 200 pitches in one day. I wonder if they have put 1 and 1 together? It appears that he young pitcher will be out until possibly opening day as he goes under the knife soon.

Otherwise Mori has taken a group of pitchers down to Okinawa for a fall training session.

Koji Fukutani and Katsuki Matayoshi may be converted to starting pitchers with the way they're going. They're throwing down bigger loads at the moment supposedly to gain more strength to pitch longer. We'll see what ends up happening. Matayoshi was previously a starter with the Kagawa Olive Guyners before joining the Dragons in 2013 and making his name as a reliever.